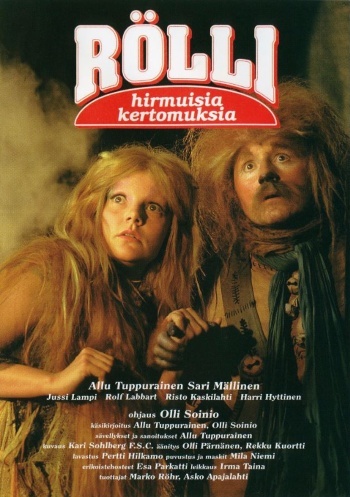 Rolli – Amazing Tales (Finnish: Rölli – hirmuisia kertomuksia) is a 1991 Finnish children's fantasy-comedy film directed by Olli Soinio. It is the first feature-length film based on the children's television character Rölli. Allu Tuppurainen, the musician and actor who created and portrayed Rölli in the television series, not only portrayed Rölli in the film, but also composed the movie's songs as he did in the television series. However, the film doesn't have much similarities with the television series, other than the characters of Rölli and the Big Rölli, as well as Rölli's attire, and the setting place being the Rölli Forest.

The film begins with Rölli meeting and befriending the Forest Fairy (Maahiskeiju) after they escape from the clutches of the Big Rölli (Suuri/Iso Rölli). A toy industrialist Seesteinen arrives in the Rölli Forest with the intention to establish there an amusement center. However, he's soon forcefully recruited as one of the evil Trashers (Roskanheittäjät), a cult of black-clad litterbugs who're led by the High Priest of the Kingdom of Evil. The Trashers worship the Great Trash (Suuri Roska), a destructive deity that appears as a large disgusting head. Intending to destroy the Rölli Forest, the Trashers spread everywhere junk and trash for the forest residents to marvel and fight over. Only the Forest Fairy understands how the strange and numerous human goods are destroying the forest and tries to convince Rölli to see that. It takes relentlessness and reconciliation before the Trashers can be stopped and the Rölli Forest saved.

The film won three Jussi Awards*  Finland's premier film industry event that recognizes annually the past year's excellence in Finnish film making by directors, actors, and writers. in 1992. Two of the Awards were Best Costume Design and Best Make-Up. The third Award, Best Supporting Actress, was won by Sari Mällinen for her portrayal of the Forest Fairy.