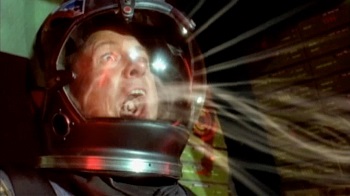 How to return energy beings to their home, for future reference.

Grey sector. Ever since B5 went online, there've been all kind of stories about the place. Strange lights, weird noises, people vanishing. Maintenance nicknamed it the B5 Triangle.
-Michael Garibaldi
Advertisement:

After a stressful day, Sheridan is out on the station's baseball diamond doing some batting practice, where he is joined by Garibaldi. Sheridan has been dealing with Narn and Centauri problems, but Garibaldi has been in The Triangle, Gray Sector, where ever since the station went online has been a hotbed for all sorts of weird tales and occurrences. Sheridan is intrigued and decides to go check it out himself.

Elsewhere, Londo and Vir are walking along having a discussion about Centauri opera when Londo is suddenly grabbed by a hooded assailant. "Fitting you should die with a song on your lips, Mollari." The ambassador seems doomed, but when the figure calls him Paso Leati, he realizes something, "Urza?" The figure takes off his hood to reveal a man named Urza Jaddo, one of Londo's oldest friends. Londo is delighted and invites Urza back to his quarters for some drinks, which Urza says he will do later.

In Gray sector, Sheridan finds the body of a dead Markab, which suddenly grabs him. Sheridan jerks away and calls for security. In Medlab, Franklin doesn't find anything wrong with Sheridan, and explains the body's movement as being caused by built up gasses after death, but won't know what the cause of death was until he does an autopsy. Sheridan suddenly starts feeling dizzy and goes to rest.

In his quarters he starts to hear strange sounds and finds a fearsome creature in his quarters. When he shoots it, it vanishes. Garibaldi comes rushing in, and Sheridan says he saw a grylor, a flying predator from Janos VII. Garibaldi suggests he was having a nightmare. He also has news on the Markab, whose death was apparently a suicide. Again, why is not apparent, and Sheridan tells Garibaldi to keep looking.

In Londo's quarters, he and Urza are catching up when talk turns to current events. Urza is opposed to the war, and claims they were lured into it by factions within the Centauri government, who also murdered the prime minister. Londo is surprised; he'd heard that was an accident, but Urza dismisses that as the "official story." He then tells Londo that a resolution is about to be brought to the Centarum declaring his house as traitors, and asks for Londo's support, who readily agrees.

In C&C Sheridan has another episode, this time seeing the Icarus exploding. He orders that sector scanned, but no one else saw anything. Back in Medlab, Franklin is not sure what's happening, but believes it to be stress related, and tells Sheridan to take time and relax.

Londo gets in contact with Lord Refa to try and get the resolution blocked. Refa is indifferent at best, and tells Londo it has already gone through, though he does promise to try to do something. Londo, dissatisfied, begins calling some of his other contacts.

Sheridan is "relaxing" on the baseball fields when Garibaldi comes up with new information, the Markab passed through Sector 14 on his way to the station. Sheridan knows that area is restricted, but not why, and Garibaldi explains what happened the year before with Babylon 4. Ever since then, a strange anomaly has existed there. He turns to leave, but just before, he gives Sheridan a datacrystal with all the information he had on the B4 incident. "You never know, I might want to write my memoirs someday."

At a banquet honoring their houses' alliance, Londo brings up his conversation with Refa, which outrages Urza. Refa is the one who started the resolution, apparently because Urza has figured out too much about Refa's plans, and Urza expresses dismay that Londo would help him. Londo protests that they have a destiny to fulfill, and gets up to leave. Before he can, Urza presents a gift, a beautifully crafted sword, which impresses Londo, but he tries to decline. Urza then jabs it into the table and issues a challenge to a Morago, a Centauri duel to the death, to save his honor and his family. Londo responds, "I take your gift, and your challenge."

As Sheridan watches the footage of Babylon 4's reappearance, he get another image, this time of his parents. He suddenly says, "That's it!" and runs off.

As Londo prepares for his duel, Vir tries to talk him out of it. Londo can't because turning it down would bring disgrace on his house. Vir protests that it's insane...

Londo: Insanity is part of the times! You must learn to embrace the madness, let it fire you.

Franklin tells Garibaldi and Ivanova that a device to measure stress he'd given him suddenly surged, then went dead, and now he can't find him. As Londo and Urza prepare to face off, Sheridan is about to launch a Starfury.

Garibaldi follows soon after and tries to get some answers from the captain, who isn't sure himself but thinks the answer is in Sector 14. When he arrives a glowing vortex opens up before him and a stream of light emerges from his mouth and eyes and disappears into the vortex. Garibaldi is surprised, but since Sheridan seems to be unconscious, he grapples the other Starfury and heads for home.

During this time Urza and Londo have kept fighting, but Urza finally manages to disarm Londo and knock him to the floor. As he goes for the final strike, Londo grabs his sword and thrusts it up into Urza's stomach. As Urza falls Londo asks why he did it. Urza tells him it was for his family, and asks Londo to look after them. Londo promises, then Urza dies.

With Sheridan back and now in mostly right state of mind, he and the others discussing what happened. Apparently, it was some kind of energy-based lifeform that actually lives in that anomaly and got pulled out somehow through the Markab ship. It jumped over to Sheridan and began showing those images, trying to tell him to take it home. Franklin wonders if he could find it again, but Sheridan is happy being only partially insane.

In his quarters, Vir tries to comfort a distraught Londo, who realizes that Urza threw the fight. If he'd won it wouldn't change anything, but his house is now part of Londo's, with no fear of the resolution. Londo tells Vir to leave, as he wants to sleep, though he's doubtful that he can.