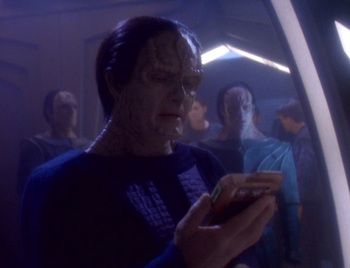 "Computer, how do you say 'dumbass' in Bajoran?"
Advertisement:

Odo, Sisko, Dax and Garak are on a runabout heading back from a conference on the Cardassian occupation of Bajor. Garak is annoyed that his "dispassionate" view of the occupation was not received well by the Bajorans. Odo, on the other hand, was received as a hero in spite of working for the Cardassians because of his reputation for fairness, though the constable is uncomfortable with the praise. When the runabout arrives at Deep Space Nine, however, all four occupants have gone comatose. We then cut to the four occupants awakening on the promenade of Terok Nor during the Cardassian occupation.

The four apparent time travelers realize that they are a few years in the past. Gul Dukat is still the commander of the station, and the current chief of security is a Cardassian named Thrax, Odo's predecessor. They discover that everyone perceives them as Bajorans even though they see each other as their real selves. Odo is also spooked by the apparation of a walking dead man, though he reveals nothing to the others. Cardassians interrupt them and haul away Dax, saying she's been "selected" by Dukat. When Garak tries to bribe the guards, they punch him in the nose.

Meanwhile, on Deep Space Nine, the four comatose men are examined by Bashir, who notes that their brains are active. He wonders if traveling through a plasma storm has affected them somehow and resolves to do some research. When Garak is punched on Terok Nor, his body on Deep Space Nine gets a nosebleed, which Bashir thinks might be a psychosomatic response. If any of his patients believe they've been injured severely enough, they could potentially stop their own hearts.

Back on Terok Nor, the bloodied Garak reveals that he pinched a scanner from the guards and uses it to discover their Bajoran identities. Odo is familiar with the Bajorans, but before he can explain why, he's interrupted by Quark, who conscripts them to clean his bar. While they work, Odo reveals that their Bajoran identities were falsely accused of trying to assassinate Guk Dukat and executed. Meanwhile, Dax is brought before Dukat, who explains that he's chosen her to be his special Bajoran friend to talk to when he gets lonely.

Overhearing a conversation between Thrax and Quark, Garak realizes that they are seven years in the past, when Odo was already chief of security, not Thrax. Putting this mystery aside, the four meet with a Bajoran resistance member hoping to get a ticket off the station, but suddenly an explosion rocks the promenade close to where Dukat and Dax were standing. The four time travelers are quickly arrested and accused of committing the assassination attempt. Thrax visits their holding cell, and Odo pleads with him to make various investigations that would prove their innocence, but Thrax rebuffs him. Sisko is becoming increasingly aware that Odo knows more than he lets on, but he avoids elaborating and says nothing of his ghostly visions.

Dax recovers from her injuries in Dukat's chambers, but as soon as he turns his back, she knocks him out and helps the three prisoners escape. Running for the airlocks, they encounter Thrax and another guard and get into a brawl. During the fight, Thrax transforms into a changeling and escapes. With no time to ponder what that means, they keep running but suddenly find themselves right back in their cell with no explanation.

Odo requests an audience with Thrax and again pleads with him to do his job, but Thrax states that he's only interested in keeping order. He then admits to knowing who Odo is and addresses him by name. Reality becomes even more fluid as the four prisoners find themselves on the promenade ready for execution. Odo disarms the executioner, declaring that this is all his fault. Across the promenade, he sees a vision of himself wearing a Cardassian uniform and presiding over the executions of their Bajoran counterparts. He finally admits that he was the real constable during these events and failed to properly investigate the suspects' innocence before it was too late. Upon this revelation, all four patients awaken on the station.

Later, Bashir explains that Odo must have instinctively brought the other three crewmembers into a version of the Great Link. Odo is apparently still more changeling than he realized. After Bashir leaves, Kira arrives, having read the report and discovered Odo's shame. She admits that she'd placed Odo on a pedestal and has been unpleasantly surprised to discover that he's just as flawed as anyone else. She asks him if those were the only innocent people he'd allowed to die on his watch, but Odo can only state that he hopes so.