Film / Blame It on the Bellboy 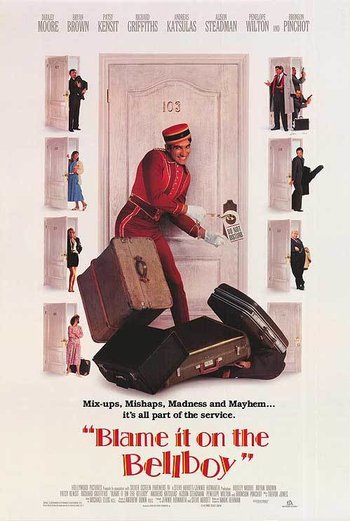 A Venice hotel finds itself occupied by three men with similar-sounding names: purchasing agent Melvyn Orton (Moore), professional assassin Mike Lorton (Brown), and minor British politician Lord Maurice Horton (Griffiths). Each of the three is there for an appointment of a very different nature.

Due to the bellboy (Bronson Pinchot) getting their names mixed up and delivering messages to the wrong men, Melvyn goes to the home of a dangerous mob boss (who's on the lookout for a foreign assassin) while believing that he's supposed to buy it; Mike starts following a woman who signed up for a blind date due to getting her picture and name in an envelope; and Maurice ends up going out to lunch with real estate agent Caroline Wright (Patsy Kensit), who is desperate to make a sale, while thinking it's a blind date.