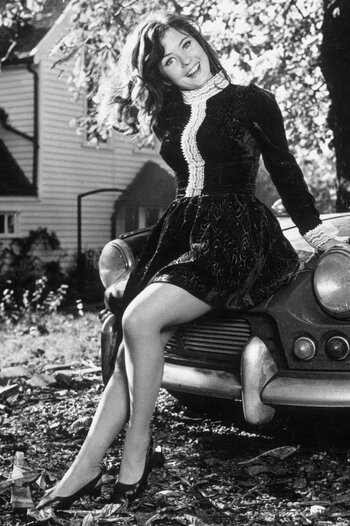 Deborah Watling (2 January 1948 – 21 July 2017) was an English actress. She is best remembered for her stint on Doctor Who playing Victoria Waterfield, a companion of Patrick Troughton's Second Doctor, from 1967-68.
Advertisement:

Deborah Watling began her career as a child actress, starting at the age of ten with a regular role in the TV series The Invisible Man (1958-59).

She auditioned unsuccessfully for the role of Doctor Who companion Polly in 1966, losing out to Anneke Wills, but the following year she was cast as new companion Victoria Waterfield, starting in "The Evil of the Daleks". She appeared alongside Patrick Troughton's Second Doctor, and Frazer Hines as fellow companion Jamie McCrimmon. She persuaded the production team to cast her father in a guest role in two stories in which she appeared: "The Abominable Snowmen" and "The Web of Fear". After one year on the show, she decided to leave, much to the disappointment of Troughton, Hines and producer Peter Bryant. Her final story was "Fury From The Deep".

She later reprised her role onscreen in the charity special "Dimensions In Time" (1993) and the direct-to-video fanmade production Downtime (1995). From 2008 onwards, she returned to voice Victoria in audio dramas for Big Finish Doctor Who, starting with " The Great Space Elevator". Her final appearance before her death was in "The Story of Extinction".

Her death in 2017 from lung cancer, aged 69, was met with great sadness from the Doctor Who community, with whom she had regularly engaged with at conventions and other events.