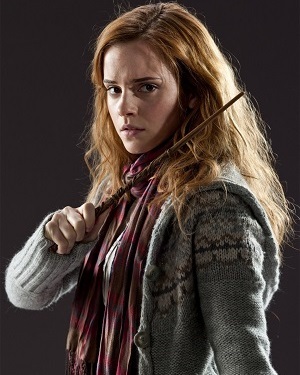 "When are you going to get it into your head? We're in this together!"

"Me? Books and cleverness! There are more important things. Friendship and bravery and—oh, Harry, be careful!"

The Brightest Witch Of Her Age.

The last third of the series' resident ¡Three Amigos!, who serves as the superego and always has a smart solution. Like Ron, Harry meets her on the Hogwarts express on the first day of school, though they don't become friends until an incident involving a troll at Halloween. Throughout the books, Hermione serves as The Professor, being practically married to the library.