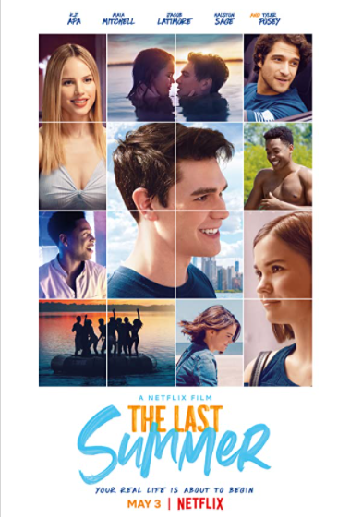 A 2019 Netflix released teen Dramedy following a loosely connected group of kids in Chicago who are trying to get the most out of their last summer before college, the last summer free of those responsibilities of adulthood.
Advertisement:

Erin (Halston Sage) and Alec (Jacob Latimore), a long-time couple, decide to break up rather than try being a long-distance couple, and start dating other people — baseball player Ricky (Tyler Posey) and popular girl Paige Wilcox (Gage Golightly), respectively — only to find it's a bit complicated. Griffin (KJ Apa), who is going to a college that isn't what he really wanted, begins dating Phoebe (Maia Mitchell), who is making a documentary about graduating students to try and get the money to pay for her college. Nerdy kids Chad (Jacob MacCarthy) and Reece (Mario Revolori) are mistaken for stockbrokers in a bar and try to fall in with that crowd. Alec's best friend, Foster (Wolfgang Novogratz), has a list of girls he hopes to romance but keeps striking out. Erin's best friend, working class girl Audrey (Sosie Bacon), has been rejected by most colleges because of low grades as a result of focusing on working over studying and is working as a glorified babysitter for a child actress who has issues with her Stage Mom.

Other members of the cast include Griffin's parents (Ed Quinn and Gabrielle Anwar) and Mason Riley (Norman Johnson, Jr.), a popular skateboarder who connects otherwise unrelated characters of the story.