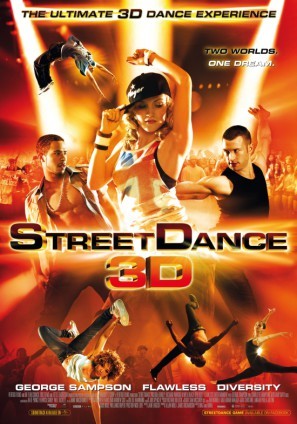 Two worlds. One dream.
Helena: Remember that for your routine.
Carly: But, that's ballet.
Helena: Think less, "this is ballet", "this is street dance"... but more, "this is dance".
— StreetDance 3D
Advertisement:

StreetDance is a two-film franchise set in Europe and centered about, well, street dancing. In both films, the leader of a hip hop/breakdance crew is trying to surpass its competition, a rival crew who will be their match for the finals of a streetdance contest. The breakthrough comes when they find a new edge adding moves and tunes from a different dancing style -ballet on the first movie, latin dances on the second one.

For sure, Dancing Is Serious Business, but the drama is much more light-hearted than it was in its predecessor, the Step Up franchise. There is no saving their home or being allowed to have their desired career: it's mostly the art for the sake of the art, and with a positive pro-diversity message.