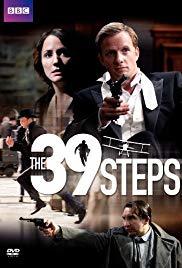 The 39 Steps is a TV movie done for the 2008 Christmas season by The BBC, starring Rupert Penry-Jones. It's an adaptation of John Buchan's novel The Thirty-Nine Steps.
Advertisement:

Unlike the more famous earlier adaptation by Alfred Hitchcock, it keeps the novel's 1914 setting, but some liberties are taken to suit the 21st century idea of a proper spy thriller.

This TV Movie contains examples of: