Film / Eyes of a Stranger 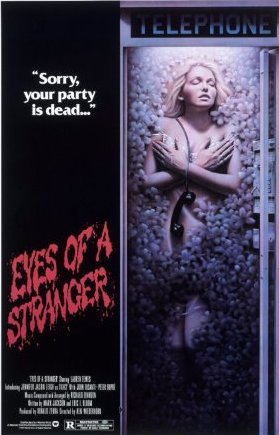 A slasher/thriller movie from the year 1981, directed by Ken Weiderhorn.
Advertisement:

Various women are being attacked by a serial rapist and killer in Miami. News anchor Jane Harris (The Love Boat's Lauren Tewes) starts to suspect that a man living across from her and her sister Tracy (Jennifer Jason Leigh, in her feature film debut) is the culprit, and starts snooping around. Jane is right in her suspicions, but will she be able to stop him, especially after he starts realizing that she's after him?