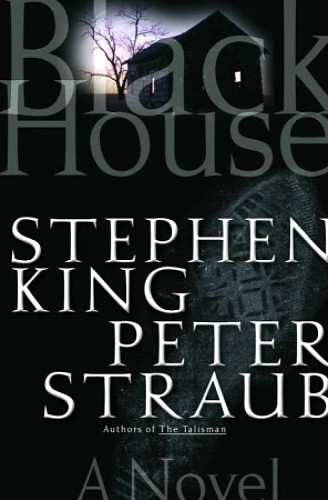 The sequel to Stephen King and Peter Straub's 1984 novel The Talisman, Black House reunites us with Travelin' Jack Sawyer, who once undertook a long and dangerous quest across America and across the plane of worlds in order to save his mother's life. Jack is now in his thirties, a former homicide detective who retired early from a career with the LAPD. He has forgotten about his adventures as a twelve-year-old, even as the effects continue to shape his life, and he is so determined not to remember that even the suggestion of events related to those times is enough to induce panic attacks.
Advertisement:

He now lives in the bucolic western Wisconsin town of French Landing, enjoying his retirement in a place of great natural beauty and a wonderful friend in the blind radio personality Henry Layden. Unfortunately, French Landing is being plagued by a savage serial murder dubbed The Fisherman, one who targets children and has a taste for their flesh in imitation of Albert Fish, a killer who operated in the 1920s. Two children have been discovered and a third is missing, presumed dead. The local police are desperate to acquire Jack's services, as his career as a homicide detective was short but legendary, and Jack was once considered something of a prodigy. At first, Jack steadfastly refuses, because every step he takes towards his old career may be another step closer to a complete mental breakdown. However, when Tyler Marshall becomes the Fisherman's fourth victim, it is no longer a matter of saving children from the pleasures of a cannibal murderer, because Tyler is a Breaker, potentially the most powerful ever, and if he is made to apply his talents towards bringing down The Dark Tower, all worlds and universes may soon be erased from existence.