Visual Novel / Scandal in the Spotlight 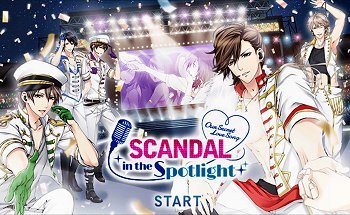 Scandal in the Spotlight is a Visual Novel Romance Game from Voltage, Inc. for iOS and Android devices. Its story revolves around Revance, Japan's hottest Boy Band - five members perform to the adulation of crowds of fans, but the sixth, the lyricist, prefers to avoid the spotlight and never makes appearances.

The heroine, meanwhile, is an aspiring screenwriter with little interest in boy bands. She has more immediate concerns, like the notebook of her work that's gone missing and the sleazy producer who keeps hitting on her. When she happens into tickets to a Revance concert, however, she's startled to recognize her own words in the lyrics of their newest song. She's even more surprised when - just when it looks like that sleazy producer is poised to end her career before it's even gotten off the ground - the members of the band sweep in with an unexpected solution.

They let her in on a closely-kept secret: the secretive sixth member of Revance, their lyricist Ryo, has in fact gone missing, and they want her to fill in for him until he's found. If she does, they assure her that they can use their influence in the entertainment world to clear up her problems. If she doesn't, she'll probably never find work in the business again.