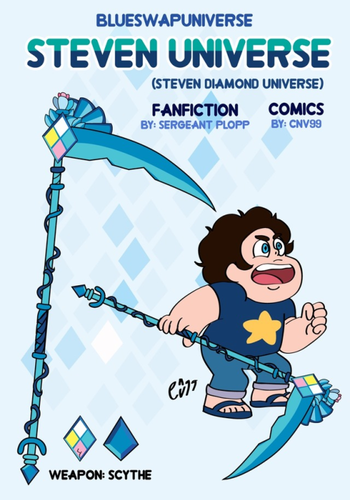 The terrible leader of the Crystal Gem Rebellion, Rose Quartz, shattered Pink Diamond. Millennia later, Blue Diamond still feels the painful sting of that horrible loss. On one of her routine mourning trips to her sister's gravesite, Earth, she meets a wildly gifted human by the name of Mister Universe and falls in love. Her newfound affection for her wonderful human led to Blue Diamond making the ultimate sacrifice to have a child with her lover, naming him Steven. Twelve years later, he must learn to master his powers, learn about his heritage, and keep Cookie Cats from disappearing.
Advertisement:

The fic has an official tumblr here