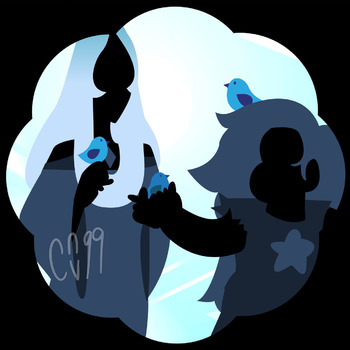 A fanmade Alternate Universe of Steven Universe where Steven is not the son of rebel leader and renegade, thought-to-be-dead Diamond Rose Quartz, but rather the son of Blue Diamond. This leaves Steven in the care of his father, Greg, and Blue Diamond's Pearl. The Crystal Gems start out as a bogeyman for Steven to avoid, fearing what might happen to him if they ever discovered his existence, only to later become their allies with what threatens Earth. Can be considered a sub-category of Momswap AU.

Examples of fan works set within the Blueswap format include:

Tropes usually used in Blueswap include: