Fanfic / Path of the King 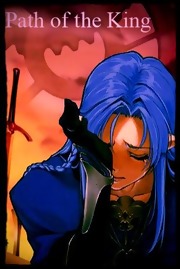 Path of the King

is a Fate/stay night Fan Fic created in response to the author's Fridge Logic of pre-Grail War Emiya Shirou not actually having done anything that heroic for someone whose life goal is to become a "Hero of Justice."

Due to certain events, Shirou decides to take a more proactive approach to fulfilling his dreams. After pressing his dying father for guidance, he begins to develop a stable magical skill set years ahead of his canon counterpart, applies his abilities to the goal of fighting real-life crime, and in time he becomes known as a neophyte Vigilante Man nicknamed the Archer. But even with the help of paranormal powers, this lifestyle isn't an easy one to maintain; between safeguarding his true identity, keeping himself beneath the notice of fellow practitioners, and sweeping Fuyuki's moonlit streets, Shirou finds himself evolving in new directions as a person, a hero and a Magus.

This delicate equilibrium can't hope to last. New threats creep out of the shadows, and the kidnapping of her close friend brings Tohsaka Rin and the Archer into mutual contact; meanwhile, in a stroke of unexpected fortune, the unassuming yet earnest Emiya Shirou volunteers to assist her with her search. As their developing private investigation becomes ever more dangerous, the consequences of closing it reach farther - and hit harder - than either of them knows to expect...

It's basically a Super Fic.

It can also be read here

On October 18th, 2021, Neoalfa released a public version of his Patreon only chapters through a MegaUpload folder, due to growning disillusioned with Fanfiction Dot Net and finding that maintaining WordPress was to laborious. Link to the public discord available in the March 11, 2022 update of his WordPress.

This fic provides examples of the following tropes, in addition to those already present in the source material: