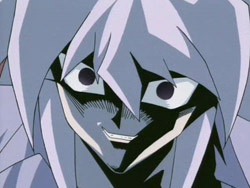 Not a kitty!
Advertisement:

Ah, Yu-Gi-Oh!. Filled with wonderful Children's Card Games. It's not like anything in a series like this could be scary — OH MY GOD WHAT IS THAT?!