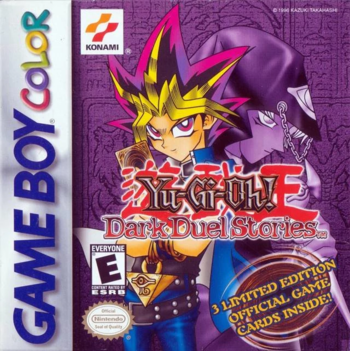 In it, you battle multiple characters from the Yu-Gi-Oh! series in order to:

There's no story due to the format of the "Campaign" mode. The gameplay is vastly different from how the real life game works as well. You can only have 5 cards in your hand at a time, and are unable to draw until you have at least 1 free space in your hand, trap cards can only be set once at a time and are sent to the graveyard after one turn if they don't go off, Monsters can be destroyed in battle by using Elemental Rock-Paper-Scissors to bypass attack and defense point differences, some Effect Monsters are Normal Monsters and vice-versa, Fusion Monsters have no Fusion Deck and must be used in the main deck, and you can also fuse compatible monsters to create a new monster that would ordinarily be a Normal Monster. Also, Ritual Monsters must be Ritual Summoned using not only their specific Ritual Spell cards, but by having a required Monster on your field. Ritual Monsters can also be used as regular Tribute Summon Monsters, but this requires steep costs of its own.