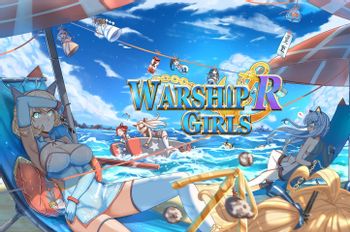 China's response to Kancolle.
Once upon a time, Kadokawa Games released on DMM.com a free-to-play browser Collectible Card Game featuring moe anthropomorphisms of World War II naval warships from the Axis powers. Due to the complete lack of playable Allied ship girls in that game, and its developers having no plans to add such ship girls until the debut of Iowa in Kancolle Kai, Chinese developer Huanmeng (currently rebranded to moeFantasy) took it upon themselves and released what could ''initially'' be seen as a clone. The result? Warship Girls

Unlike Kantai Collection, this game is on the iOS and Android platforms, and features ship girls from both the Allied and Axis powers.

Have you ever dreamt of teaming Lady Lex

up with the Crane

How about having HMS ''Hood''

fight side-by-side against the Abyssals? No problem.

What about a big-gun battleship meetup with participants from both Allied and Axis powers? Now we're talking.

There used to be two versions of the game, developed by different companies due to legal problems between them. The official one developed by moeFantasy and another one developed by Patch Games (the former game's distributor). The Patch version has since been shut down.

For specific character-related tropes, please refer to the Character Sheet.