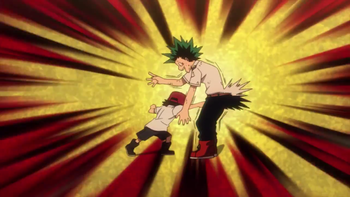 Sometimes, we get paid a surprise visit from the hero Ms. Joke and laugh ourselves silly. Enough to wonder if we didn't inadvertently fall victim to her Quirk. There's plenty of comedy in trying to be a hero, no matter how much her sour rival Eraser Head cares to disagree and tries to use his Quirk to erase it (maybe one day she'll get a laugh outta him, too).

WARNING: Per wiki policy, Spoilers Off applies to Funny Moments pages. All spoilers will be unmarked.

Works with their own funny pages include: