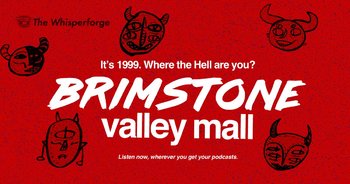 A comedy podcast about Hell on Earth.
Hey, this is Hornblas, lead singer of Mall Rat. Misroch, Asmoraias, Belzagor, and I aren’t home, so leave us a message. None of us are demons, by the way. Definitely not from Hell. Okay, cool. You know what to do.
—Hornblas, in the intro
Advertisement:

The year is 1999. In Pennsylvania's Brimstone Valley Mall, four demons masquerade as humans. They were sent up from Hell to lead humans into sin, but found that they much preferred life on Earth to life in the fiery pit, and drag their feet on their assignment as much as possible. Instead, they prefer to work menial jobs in the mall, mess around with the latest human fads, and play in their band, appropriately named Mall Rat. Recently, they've landed the gig of the millennia — literally. Playing as the opening act for Hell's Y2K concert, this could be Mall Rat's big break. And, if they play their cards right, they might be able to persuade their superiors to "misplace" their Earth contracts, "forcing" them to remain there indefinitely.

There's just one problem. Their lead singer is missing, and his demonic powers are needed to summon all the other demons to the concert, and, more pressingly (at least, according to their superiors), kick off Y2K. This gives the gang less than two weeks to find him, or face the wrath of Satan herself.

Brimstone Valley Mall is a podcast produced by Whisperforge, and it began on December 19, 2019. The first ten-episode season has been released, with a second season on the way.