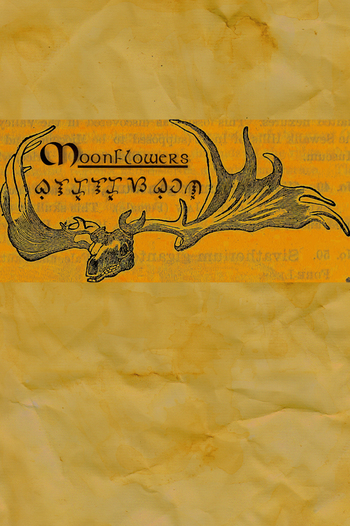 The cover concept, Jan 2019. Baybayin translation: Bulaklak sa buwan.
Moonflowers is about an Irish guy, an American girl, and the dog they rescue. Who is secretly the girl's presumed-dead father.
...Yeah, it's that kind of story.
And by story, I mean "Fairy Tale."
And by fairy-tale, I mean "the unsettling kind."
— The album summary.
Advertisement:

is an Urban Fantasy Troper Work published on the HitRECord website by Sharysa, under the name "Logophile." It was started in April of 2014, and is in-progress. It was submitted in three Season 2 theme collaborations: "Home," "Secrets," and "The Dark." (Although "Home" didn't make it into the final cut for Season 2 themes.) It is also being uploaded to Inkshares, a crowdfunding publisher (link is here)

Alima Song is an Asian-American young woman who moves to the fictional Irish town of Cloncarrig, about two months after her parents vanish. When her hike on the Cliffs of Moher ends in an unexpected storm, she waits it out in Moher Tower with Malachy Bray and his little brother Logan. Over the weeks that she settles into her new life in Ireland and gets to know Mal and his friends, she gets pursued by the Hunter, a Folk man wearing an Irish Elk skull who leads The Wild Hunt.

She then stays at the house of the town's innkeeper and cunning-man, Ogma O'Luain. Soon afterward, Alima finds an injured white wolfdog and takes him in, unaware that the dog is actually her now-cursed father Ned.

The main Story Arc for Moonflowers is almost Slice of Life apart from the Fair Folk, as it follows Alima adjusting to Ireland and dealing with her parents' loss. The second one follows Ned and reveals that Alima and her parents are three of the soon-to-be victims in the Fairy Raid. The Raid happens every seven years on Halloween/Samhain in a random Celtic country, and is dreaded since nobody knows who the marks will be, and neither can they stop it from happening.

Moonflowers draws heavily on the overlapping Celtic Mythology and Fairy Tale elements, and is quite a Fantasy Kitchen Sink seeing as All Myths Are True. While the plot focuses on an ensemble cast, Malachy and Alima are the main leads, with Ned also prominent.

Tropes in the work: