"I don't like bullies. I don't care where they're from."
"BRING ME THANOS!"
— Thor Odinson would have words with the Mad Titan.
Advertisement:

Avengers: Infinity War is the culmination of ten years' worth of movies building up to this moment, where almost all of the Avengers, their allies, and other unrelated heroes unite to battle the mightiest MCU villain to date, who wields the power of the Infinity Stones. Of course, Marvel Studios brought their A-game to the table. 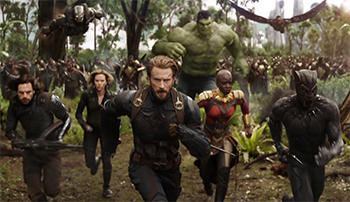