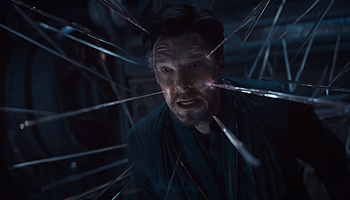 "You think you know pain? He will make you LONG for something as sweet as pain."
"Hear me, and rejoice! You have had the privilege... of being saved by the Great Titan. You may think this is suffering. No...it is salvation. The universal scales... tip toward balance because of your sacrifice. Smile - for even in death... you have become children of Thanos."
— Ebony Maw on the Mad Titan's worldview.
Advertisement:

Following his cameo in The Stinger of The Avengers, the Marvel Cinematic Universe spent six years building up Thanos as the ultimate threat.

Now, it's time to see the Mad Titan unleashed, and fittingly, this film is way, way, way darker and contains way more Nightmare Fuel than all of the previous MCU films.