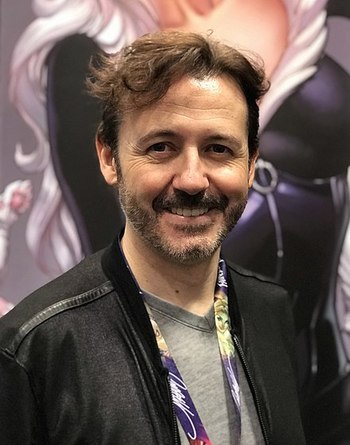 Jeffrey Scott Campbell (born April 12, 1973), known professionally as J. Scott Campbell (though he was credited in his early years as Jeffrey Scott) is an American comic book artist and writer from Denver. His Signature Style includes buxom women and female Fanservice, a point he is still very well known for to this day. That, and high-octane action sequences.

Speaking of which, Campbell rose to fame in the early-mid '90s as the co-creator of the fanservice-laden comic Gen¹³ for Jim Lee's Wild Storm. He remained on the book up until issue #20, where after left to found the imprint Cliffhanger, and work on his creator-owned comic Danger Girl. Said comic emphasizes his two most well-known traits, listed above.

Since the '00s, Campbell has been heavily involved with Marvel Comics, having signed an agreement to work with them since 2006. Most commonly, Campbell does cover art on The Amazing Spider-Man and related characters.