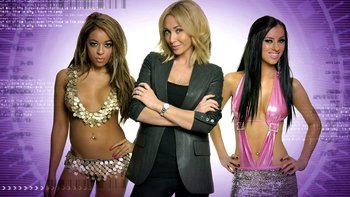 Snog, Marry, Avoid? is a British TV beauty show presented by former Atomic Kitten Jenny Frost (Ellie Taylor from season 5 onwards). In each episode Jenny rounds up three guests, usually female but sometimes men will be chosen as well (sometimes celebrities as well). These guests are chosen for their addiction to "fakery" - i.e. excessive make-up, hair extensions, false tan - and their poor taste in going out clothes. The guests are put in front of POD - the Personal Overhaul Device. POD verbally tears each guest down and shows them a video poll of men on the street saying whether they would Snog, Marry or Avoid them (spoiler: they always say "Avoid"). After hearing that the public hates their look, the guest undergoes a "make-under" and are given a so-called 'natural beauty' look. They are then shown another poll where the public now says they would either Snog or Marry them. Jenny meets up with the guest three months later to see whether or not they've kept up their new look.