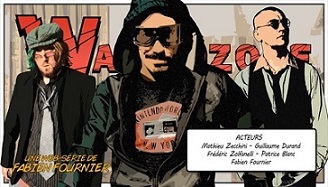 WarpZone Project is a French Web Original made by the same team as Noob, including Fabien Fournier as director and writer.

The series basically combines the Direct Line to the Author with Fiction as Cover-Up runs with the result: Speculative Fiction in all its forms is actually true history and Everyone is a Super. However, to keep the latter under control, a Masquerade is enforced so everyone thinks super powers exist only in fiction. The story follows a young man named Téo on whom the system meant to hide the world's "fictional" aspects has stopped working. That lets him see what the world is really like. He also discovers that people in his situation are the few super-heroes and super-villains that were able to develop their powers.