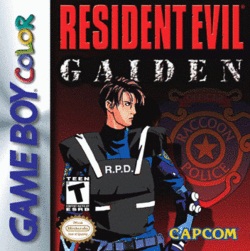 Resident Evil Gaiden is a portable installment in the Resident Evil series released for the Game Boy Color in 2002. It was co-produced by Capcom and UK-based developer M4 based on a scenario written by Code: Veronica director Hiroki Kato. The game came into existence when the Game Boy Color port of the original Resident Evil was cancelled and Capcom needed a replacement game to fill their lineup.

After the events of Resident Evil 3, Barry Burton and Leon S. Kennedy joined a secret anti-Umbrella organization, comprising former S.T.A.R.S. members and ex-Umbrella employees and set on putting a stop to the operations of the evil medical corporation.

The game starts with the escape of a shapeshifting B.O.W. developed at Umbrella Labs. Leon managed to track it as far as the ocean cruiser, The Starlight before contact with him was lost. Now Barry must board the ship to find him, as well as figure out the mystery of a young girl he finds aboard.

The game itself is an overhead adventure game where the player controls a party of up to three characters (Barry, Leon and Lucia), switching between them at any time. Battles occur when the player character runs into a monster, in which the game switches to a first person view and must align their aiming gauge to where the monster is centered.

Gaiden is mostly notable for its cliffhanger ending that was meant to foreshadow an earlier version of Resident Evil 4. However, due to the changes in RE4's premise during development that disregarded this cliffhanger ending, along with Gaiden's own overall obscurity, the game has been relegated to non-canon status.