Comic Book / Two for the Death of One 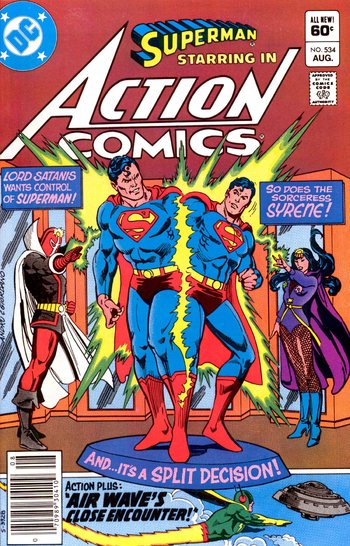 "Two for the Death of One" is a Superman storyline which ran from Action Comics #534-541. Marv Wolfman wrote the full story, and art duties were distributed among Curt Swan, Gil Kane, Joe Staton and Irv Novick.

Superman gets suddenly and unwillingly dragged to XIVth Century England by his old enemy Satanis, who was battling his wife Syrene over the Runestone of Merlin the last time Superman saw him. After defeating and capturing Superman, Satanis reveals he was hurled into the past after being defeated by Syrene. Nonetheless, he devised a new scheme to steal the magic of the Runestone. Since he cannot touch the Stone directly because he would get burned to ashes, he will channel its energies into Superman and will take over his body, trusting that Superman will be resilient enough to survive while he absorbs the Stone's power.

Satanis proceeds to filter the Runestone's magic into Superman, but Syrene shows up to claim the gem back before Satanis can possess Superman. Both villains duel over Superman's body, and their magic spells pull Superman apart until splitting him into two Supermen, each possessing the half of their powers. Since the invulnerable Superman is the only one useful to their purposes, Syrene quickly teleports away with him, and Satanis sets to hunt her down after sending the useless twin back to his own time.

Back in the present day, Superman must deal with several threats, despite of his diminished power, and find a way to return to the XIVth Century. Unfortunately, Satanis has blocked off every avenue of time travel Superman knows of so he cannot interfere. Superman's only hope is finding some way to go back to the past before one of his enemies destroys his other half and claims the power of the Runestone of Merlin.