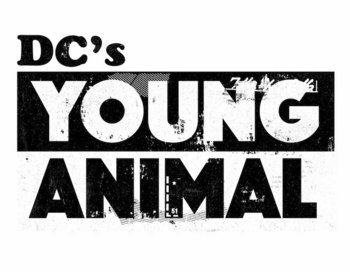 "I am thrilled to help bring DC’s Young Animal to life, having been raised on experimental 80s and 90s takes on superheroes. I see Young Animal as a place to try new ideas - following the spirit of those books from the past but bring them somewhere else. I see it as an imprint where we can explore fine art, bold concepts, mature themes, and strangeness — with lots of heart."
Advertisement:

Young Animal is an imprint of DC Comics founded by My Chemical Romance frontman (and writer of The Umbrella Academy) Gerard Way that launched in September 2016.

Described as "comics for dangerous humans," Young Animal publishes titles intended for mature readers, putting modern spins on classic (and obscure) DC Comics concepts like Doom Patrol, much like the Vertigo imprint before it. Though published independently from the mainstream DCU titles and not being considered part of the DC Rebirth branding, Young Animal comics are still set within that universe; Mother Panic, for example, is set in Gotham City.

Never intended to be a permanent fixture (it was described as a "pop-up imprint"), Way announced the imprint's titles would end in summer of 2018, although they returned a year later. The one exception was Doom Patrol, which was announced to continue indefinitely.

Advertisement:
open/close all folders
Wave One
Wave Two
Wave Three — The Remix
Following the line-wide "Milk Wars" crossover, Young Animal was relaunched with a handful of new titles, and continuations of existing ones:
Wave Four
A fourth wave has been announced, to be released in July 2019.
Advertisement:

Compare to MAX, a similar imprint by Marvel Comics. Not to be confused with the Seinen magazine of the same name from Japan.