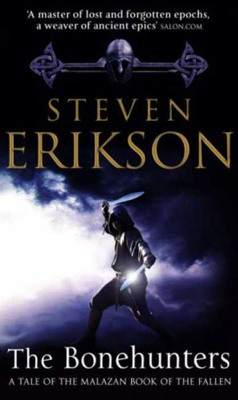 "This, more than at any other time beforehand, gave brutal truth to the conviction that Adjunct Tavore was cold iron, thrust into the soul of a raging forge..."
— None to Witness (The Lost History of the Bonehunters), Duiker of Darujhistan
Advertisement:

The Bonehunters is the sixth book of ten in Malazan Book of the Fallen, and it is the third and last book in the Seven Cities arc, picking up where House of Chains left off. It was released in 2006, and is preceded by Midnight Tides.

Now that Sha'ik's rebellion has been crushed, Adjunct Tavore's Fourteenth Army is in pursuit of the increasingly desperate Leoman of the Flails and the last rebel army under his command. He fortifies himself in Y'Ghatan, a city already infamous for the Malazan blood spilled there, and the Fourteenth prepares itself for a brutal siege. Fiddler, Kalam and Quick Ben, reunited under Tavore's banner, attempt to discover just where the Adjunct's loyalties lie, while Fiddler's squad mage Bottle finds himself the target of an unexpected force reaching forward from the very beginning of history.

Meanwhile, an aimless Apsalar is given a list of assassination targets by Cotillion, and picks up a couple of mysterious but obnoxious ghosts along the way.

Karsa Orlong continues to wander the wastes of Seven Cities, saving the life of a witch, Samar Dev, in the process. Fascinated by the huge Toblakai, Samar Dev becomes his travelling companion, to Karsa's grudging acceptance.

Heboric Ghost Hands, brimming with newfound power as the Destriant of Treach, sets off with his companions to Otataral Island in answer to the cries of the souls trapped in the mysterious jade colossus buried in the sand.

And in Malaz City, Banaschar, a drunken former priest of D'rek, desperately attempts to keep his head above water in the mass of conspiracies and ulterior motives that is threatening to boil over and take the very heart of the Malazan Empire with it.

The Bonehunters provides examples of the following tropes: