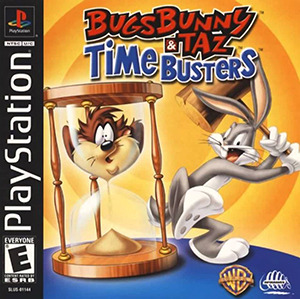 Smashing their way through time.
Advertisement:

The story begins when Daffy Duck, working as an exterminator, pays a visit to Granny, and, being Daffy Duck, things go wrong: he accidentally breaks her massive time machine, the Time Regulator.note How she has a Time Machine is never explained. He and its stabilizing crown jewel, the Time Gem, are sent into the distant past, leaving the machine unstable and scattering denizens of the various eras of history across time. Bugs is strong-armed by Granny into retrieving not only Daffy and the Time Gem, but also the countless gears scattered throughout history. He's not alone, however. Granny helpfully sends along her precious pet Taz to aid Bugs in his quest. What could possibly go wrong?

What follows is a long, epic quest across history to save time itself, and Bugs and Taz chase Daffy through four different eras — those of the Aztecs, the Vikings, the Arabians, and the Transylvanians. The two work to collect the gears, return temporally displaced characters to their era, and battle local villains that get in their way. The player(s) must solve various puzzles in order to progress; some puzzles only solvable by one of the heroes, and some only solvable by teamwork. Granny and Tweety will also check in with the heroes on their quest and teach them new abilities that will aid in their quest.

Each "era" is accessible through Granny's homestead, Granwich, and each era has several smaller locations accessible through a main hub area, as well as several mini-games. Each era ends with a boss fight with the lord of the era — Yosemite Sam for the Aztec Era, Elmer Fuddinson for the Viking Era, Babba Chop for the Arabian Era, and Count Bloodcount serves as the final boss of the game through the Transylvanian era.

As the indirect sequel to Lost in Time, Time Busters features polished and recycled assets and mechanics returning from its predecessor. The chief thing that sets Time Busters apart is the co-op gameplay; while a single player can play the game alone and control both Bugs and Taz, two players can play the game together to better take advantage of the two playable characters, albeit sharing a single screen. The Magic Mirror feature allows the players to focus the camera on one of the two, and they can summon their partner if they wander offscreen or too far away.