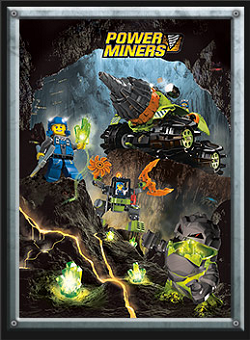 Now this is a drill!
LEGO Power Miners is a LEGO Theme beginning in 2009 and concluding in 2010, revolving around a team of miners trying to prevent a large population of Rock Monsters from destroying the Earth.
Advertisement:

In the second wave of sets, after their encounter with the Crystal King, the Power Miners descend even deeper into the Earth's crust and discover Lava Monsters, posing an even greater threat than the Rock Monsters due to their superheated bodies. The Power Miners continue excavating the crystals while using water to cool down the Lava Monsters to lessen their volatility.

LEGO Power Miners is often considered a Spiritual Successor to Rock Raiders. Compared to its predecessor, Power Miners has much less emphasis on individual characters and goes for a much more Lighter and Softer approach, especially with its goofy Rock Monsters. However, it is agreed that the set designs of Power Miners are far superior to the simple builds of Rock Raiders sets, even if the lime/orange color scheme is rather contested.