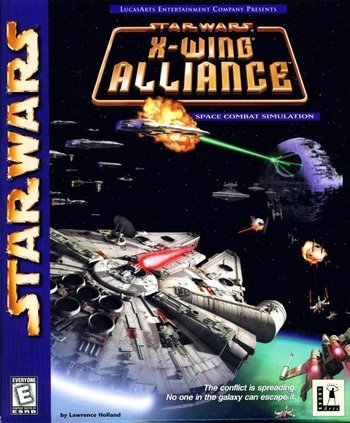 Witness the firepower of the Empire's fully armed and operational battle station!
As the Rebel insurgency spreads,
the GALACTIC EMPIRE has
become embroiled in civil war.
To avenge the Emperor's defeat
at Yavin, Darth Vader has struck
back at the Rebel base on Hoth.

Caught in the crossfire is the family
of Tomaas and Antan Azzameen,
owners of a successful shipping
operation. Despite the schemes of
corrupt Imperial officials and a bitter
feud with their archrivals the Viraxo,
they have survived.

Sympathetic to the Rebellion, but
fearful of the Emperor's far-reaching
power, they will soon be forced to
take sides in the greater conflict
around them...
Advertisement:

A Star Wars Legends Space Fighter sim released for the PC in 1999 by LucasArts.

While X-Wing and Tie Fighter had covered epic campaigns, their successor X-Wing vs. TIE Fighter had initially not included a campaign at all, and when was put in place for the expansion, it was deliberately set in an out-of-the-way part of the galaxy to avoid impinging on the main events of the film trilogy. It was not until now that LucasArts decided to once more cover the epic storyline, now from a different angle.

There's No Campaign for the Wicked as you play only as the character Ace Azzameen, halting the Featureless Protagonist attitude of the previous games (the X-Wing and TIE Fighter protagonists were named, but only in the manual). Ace is the youngest scion of the Azzameen family of traders, some of whose members are sympathetic to the Rebel Alliance. Their enemies are the Viraxo family, who similarly have ties with the Empire. Your father has decided you're old enough to stop playing in sims and start helping out with the family business, sending you on training and trade missions under the watchful eyes of your siblings (neatly shoehorning in the tutorial), but soon the Galactic Civil War starts impinging. Though your father tries to keep the family neutral, the Azzameens end up getting dragged into the war with the capture and death of Tomaas and Galin, their home station is taken by the Empire forcing the remaining Azzameens to seek shelter with the Rebel Alliance, and Ace joins the Rebels as a starfighter pilot.

The rest of the campaign consists of battles mostly with ties to the film trilogy or at least the Expanded Universe, with the occasional family mission. It culminates in the Battle of Endor, at which you fly the Millennium Falcon.

X-Wing Alliance allowed a far greater range of craft to be piloted than previous games, especially X-Wing Vs. Tie Fighter, and had an extensive multiplayer mode.