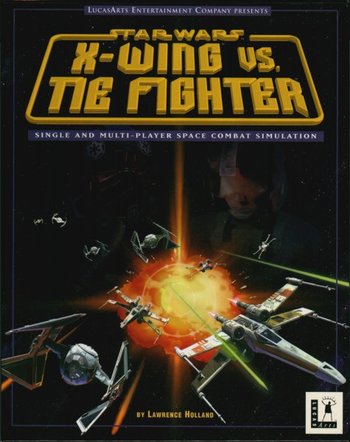 Dogfight in a Galaxy Far Far Away... Online!
A TEST OF SKILL

The galaxy is engulfed in the
flames of Civil War. In the vast
reaches between the stars
great battles erupt with searing
laser blasts and fiery
explosions.

Amidst the Empire's Star
Destroyers and the Rebellion's
Mon Calamari cruisers dart
small craft of incredible power
and speed... the starfighters.

Through the skill and bravery
of the men and women who
pilot these deadly craft, the
outcome ultimately will be
decided.
Advertisement:

X-Wing vs. TIE Fighter was the sequel to both X-Wing and TIE Fighter and was first released in 1997. Though the game lacked a comprehensive campaign mode (like the well fleshed-out, highly praised story-based campaigns of its predecessors) it included a series of non-connected single player missions. Its main selling point, however, was that it would allow online play for players to hone their interstellar dogfighting skills against fellow wetware-based intelligence. In this sense, it perhaps could be best compared to Electronic Arts' Battlefield series or other games focusing strictly on online play.

That said, critics and gamers alike were disappointed by the lack of a single-player campaign mode, so LucasArts released an expansion pack, Balance of Power only a few months afterwards. The expansion contained a campaign each for the Rebellion and Empire, and greatly expanded the playability of the game.