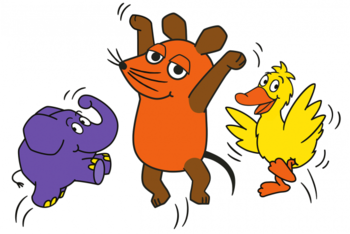 ...and of course with the mouse and the elephant! (And the duck.)
Advertisement:

Die Sendung mit der Maus ("The Programme with the Mouse") is an educational TV series for children, by the German public broadcasting station ARD. An international version with English dubbing has been created in Australia and airs as Mouse TV.

While the German public broadcasters often have to take flak for shallow programming in spite of their "culture and education mandate", this show is often cited as a counter-example. And with reason, for Die Maus is very popular amongst young and old, owing its continuous existence since 1971 to a high quality mix of education and entertainment.

The basic concept is relatively simple: For half an hour, cute animated stories alternate with documentary-style educational segments, wherein a wide range of real-world topics - often involving the industrial production of everyday objects - are explained in a child-friendly way. Meanwhile the confident and clever Maus, along with her more excitable friends Elefant (Little Elephant) and Ente (Duck), opens each show and appears throughout in short interstitial animations, called Mausspots.

By now, the show is an established part of German cultural life, recognizable and referenced very much as Sesame Street is in the US. Creator/host Armin Maiwald's voice-over style—simple, calm and down-to-earth without patronizing—has become outright iconic, hence you can see hear it often being parodied in German Media, complete with a Suspiciously Similar Song version of the title theme.

In the late 1980s or early 1990s a selection of episodes aired on Australian television, as Mouse TV or The Show with the Mousenote dubbed by a German exporting company called TransTel, now DW TransTel, a subsidiary of Deutsche-Welle TV. The voice-over explanations were dubbed into English; the story segments were selected from the ones, such as the Little Mole stories, that were not primarily verbal. The Australian dub has since been exported worldwide.

...and of course with the mouse and the elephant!