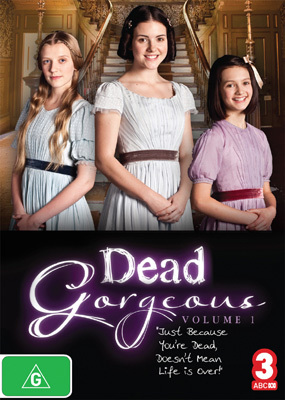 The three Ainsworth sisters would love to have lives of their own...were it not for the fact that they were killed in an accident in 1860. So, fast-forward 150 years to 2010, when they've finally been given a second chance to go to school in their old house. At which point they discover how much the world has changed.

Of course the usual hijinks ensue, both due to their Fish out of Temporal Water status and the fact that the supernatural world seems to intersect with Ainsbury College in various bizarre ways.

Oh, and there's two conditions: They can never reveal their true selves, and they must not flunk out of school.

They quickly develop their own sets of goals. Rebecca, the eldest, almost immediately sets her sights on hunky jock David, while sister Sophie feels pressured by academia. Meanwhile, youngest sister Hazel is quickest to adapt to her new surroundings. They're aided by their confidante Jonathan, the only living being to know their secret. Meanwhile, their liaison with the ghost world is a hippie named Agatha, who spends a lot of her time sitting around with greaser Buddy, Brawn Hilda Grendel and philosopher Sophus.