Series / In the Night Garden... 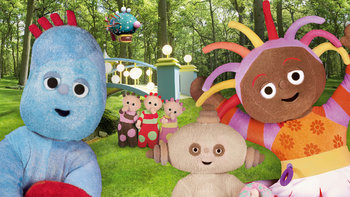 From left to right: Igglepiggle, the Tombliboos, Makka Pakka, and Upsy Daisy.
Advertisement:

A British children's television series that aired on The BBC's preschool channel CBeebies from 2007 to 2009, and is intended to give children something calming to watch at night. Ragdoll Productions (of Teletubbies fame) is the production company behind this show.

The show takes place in the eponymous Night Garden, which is a forest housing the show's characters. Among said characters are Igglepiggle, a teddy bear-like blue character who only speaks in squeaks; Upsy Daisy, a brown-skinned human-like girl; Makka Pakka, a tan character who lives in a small cave in the Night Garden; the Tombliboos, a trio of human-like characters who live in a big bush; and the Pontipines, a big family of tiny humanoid creatures who live in a small house they share with their neighbors, the Wottingers (which are literally another family of Pontipines but with blue clothing instead of red clothing).

The show has an official website that can be found here

In the Trope Garden...