Series / The Great British Bake Off 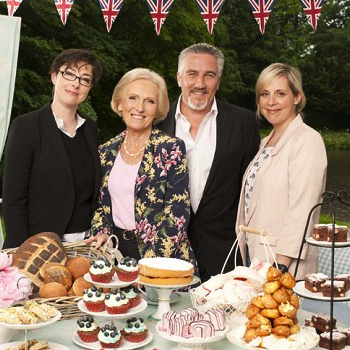 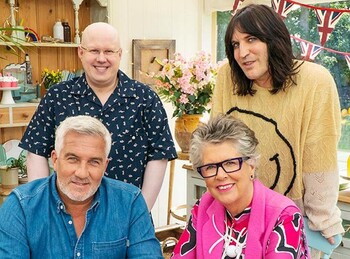 MasterChef for amateur bakers, basically. Originally hosted by comedy double act Mel Giedroyc and Sue Perkins, and judged by British celebrity pastry chefs Paul Hollywood and Mary Berry; following a well-publicised Channel Hop in 2016, Hollywood is the only member of the original line-up present these days.

Episodes are set in the Bake Off Tent — pitched in the gorgeous grounds of a stately country manor — and span a series of ten weekends divided into themes, including Bread, Pastry, Biscuitsnote or 'cookies and crackers' in some places and Patisserie. Twelve participants must complete three timed baking challenges in each program. Rather than being judged against one another, they are expected to build their own skills and either noticeably improve their performances or maintain a consistently high standard.

The challenges are, in order:

Each week the best performer overall is named "Star Baker", while the poorest is eliminated. The ultimate winner of each series is given an inscribed cake stand and the knowledge that upwards of a fifth of their countrymen have just watched them prove themselves the nation's greatest creator of home-baked creams, cakes, and pies.

Deliberately and completely eschewing the typical manufactured melodrama of many reality-show competitions, the program takes a more lighthearted and friendlier approach, with the hosts in particular given free rein to indulge their love of comic accents and bad puns... among many other things. Any drama that arises is generally because of individual mishaps or lack of time rather than interpersonal conflicts (though they have occasionally occurred).

Despite this — or perhaps because of it — the show has become a massive hit and is credited with single-handedly reviving the long tradition of baking in Britain, having inspired a huge increase in participants along with the inevitable economic implications, through cookery classes, books, etc. Several of the winners and runners-up have gone on to carve out thriving celebrity baking careers from the notoriety.

Having spent its first four series on BBC2, the fourth receiving the best ratings yet (and by that, we mean the best ratings for a regular series on that channel in at least twenty years) meant that the fifth series onwards was to be shown on BBC1. Also starting with the fifth series, each episode is accompanied by An Extra Slice, a follow-up hosted by Jo Brand that takes a humorous look at the latest episodes with various celebrities in front of a live audience. The move to BBC1 resulted in astonishing ratings, with the show becoming the most-watched programme on British television, full stop.

In September 2016 it was announced that the production company that makes the show had rejected the BBC's bid for renewal and the show would be moving to Channel 4. Mel and Sue immediately announced they would not be part of the move, and were joined by Berry shortly after. The first Channel 4 series began in August 2017, with Paul Hollywood the only one of the lineup to jump channel; Mary has been replaced by Prue Leith and Mel and Sue by Sandi Toksvig and Noel Fielding (Toksvig was herself replaced by Matt Lucas beginning with the 2020 series). Whilst viewing figures are down, they are still very strong by C4's standards, and the new incarnation has received positive reviews, on the understanding that it's no longer the iconic version.

As of summer 2019, seven seasons of the program are available on Netflix,note under the US name The Great British Baking Show (as Pillsbury owns a trademark on "Bake-Off" in connection to its own baking competition) as is Masterclass — in which Paul and Mary make the different challenge items themselves.

The show has spawned several spin-offs, including a celebrity edition for charity, a Junior series featuring 9-to-15-year-olds (originally shown on CBBC, and later in a late-afternoon slot on Channel 4), and The Professionals (formerly Creme de la Creme), which, as its name suggests, features professional pastry chefs.

Tastes strongly of these tropes: