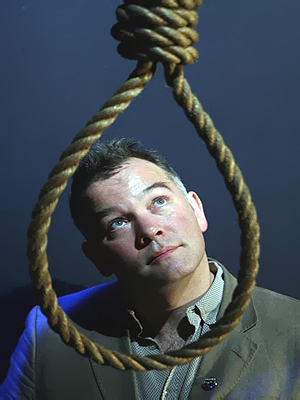 Terry Christian's let himself go.
"I can [do standup], I can do it really well, actually. I'm so good at it, one of the things that I do, I make it look like I can't do it, but I can. And if you're sitting there, having been brought by friends, thinking I can't do it, the question you have to—I've been on stage thousands of times, literally—the question you have to ask yourselves ... is, 'How many times have I been to standup and what kind of acts have you seen?' Maybe four or five times, you haven't seen the right sorts of people, you have no context for me, so—you're not in any position to have an opinion about me. (Beat) Good, that's warmed the room up."
—Carpet Remnant World
Advertisement:

Stewart Graham Lee (born 5 April 1968) is a British stand up comedian, writer and director. Early on in his career he wrote material for Spitting Image and Weekending before teaming up with Richard Herring to write material for The Day Today's radio predecessor On The Hour. Lee And Herring later started in their radio sketch shows Lionel Nimrod's Inexplicable World (Radio 4) and Fist of Fun (Radio 1) and presented three series of Lee and Herring on Radio 1 which mixed sketches which music chosen by the duo themselves. They later starred in a television version of Fist of Fun and a live Sunday afternoon show called This Morning With Richard Not Judy. Lee then moved away from performing to concentrate on directing shows for fellow comedians The Mighty Boosh and Simon Munnery before co-writing and directing the notorious musical Jerry Springer - The Opera which attracted a prosecution for blasphemy. He then returned to stand-up and, in 2007, was awarded the dubious honour of being the 41st best Stand Up Comedian (which he took as the title of his next tour). He returned to television with Stewart Lee's Comedy Vehicle, a mixture of stand-up and sketches, with three series filmed.

Stewart Lee's comedy is noted for his extensive use of Deconstruction and Lampshading (to the point where he is likely to lampshade his deconstruction of a piece of lampshading and then deconstruct himself doing so) and his ability to mine over half an hour's comedy from the most mundane of subjects.

He has so far released five stand up specials:

He wrote a novel called The Perfect Fool, and a book called How I Escaped My Certain Fate which is a sort of DVD Commentary on his first three DVDs.

No, I'm an entomologist.