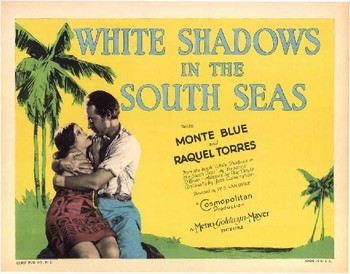 It is set in the islands of south Polynesia (the credits cite the Marquesas, but the film was actually shot in Tahiti). The film opens on a ratty-looking trading post set up by Sebastian, a slimy white pearl merchant. Sebastian ruthlessly exploits the locals, driving them to make highly dangerous dives down into the coral reef and fetch pearls, and paying the ignorant natives in worthless trinkets for the priceless pearls.

Dr. Matthew Lloyd (Blue) is so ashamed by the conduct of white colonists that he has mostly left his medical practice behind for alcoholism. But he still stands up to Sebastian's unethical practices, which leads Sebastian and his cronies to set Lloyd adrift at sea on a plague boat. A storm eventually blows Lloyd's ship onto the reefs outside an uncharted island, unknown to the white man. The natives greet Lloyd as a "white god", and after Lloyd saves the life of the chief's son, the chief offers Lloyd the intimate companionship of the chief's daughter, Fayaway (Raquel Torres). Lloyd lives an idyllic existence on the lovely little island...until he finds out that the reefs outside this island are also a fruitful source of pearls.

White Shadows in the South Seas was loosely inspired by a travel book of the same title. It is notable for taking a shockingly modern, enlightened view of white colonialism and exploitation of native peoples. It is also notable for technically not being a silent film, but rather the first film ever released by Metro-Goldwyn-Mayer with a synchronized soundtrack (consisting of sound effects and a score and exactly one word of spoken dialogue),note These kinds of films were known at the time as "goat glands

", after a then-popular quack treatment for impotence. and the first ever roar of MGM's iconic Leo the Lion.

Compare Tabu, another silent film shot three years later in the same place and dealing with many of the same themes. Robert Flaherty was involved in the production of both. Or compare The Pagan, the next film that Van Dyke directed, shot in the same area and again with similar themes.