Film / The Other Side of the Wind 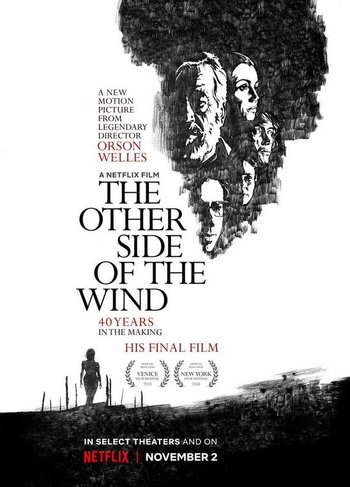 "Well here it is... if anybody wants to see it."
"Anyway, this little historical document has been put together from many sources. From all the footage shot by TV and documentary filmmakers, and also the students, critics and young directors who happened to bring 16 and 8mm cameras, having been invited to Jake's 70th birthday party...Hannaford's own unfinished last motion picture is part of this testimony, — The Other Side of the Wind. It has been left, just as it was when they showed it at his party, on what turned out to be the last day of his life."
— Brooks Otterlake, opening narration.
Advertisement:

The Other Side of the Wind is the long-shelved belatedly completed film directed by Orson Welles and co-written by him and Oja Kodar. The film was produced on-and-off between 1970–76, when principal photography ended. It was finally released 42 years later on November 2, 2018, giving it the distinction of having the longest completed production of any film in the history of the medium, beating out the 31-year production of Richard Williams' The Thief and the Cobbler.

The movie begins with the death of Jake Hannaford (John Huston), a legend from the Old Hollywood era. It then flashes back to his 70th birthday party, with the conceit being that Hannaford had attracted so much attention from a gaggle of film critics, film students, and biographers that his final day was recorded by several different cameras lying around the party. The edited version of his final days constitutes the entire film, dealing as it does with Hannaford wrestling with his fame, his legacy, and his attempt to revive his career by making a sex-and-violence filled movie in the style of New Hollywood filmmakers of the time. Over the course of the day Hannaford is followed everywhere by reporters, documentarians, film students, and biographers who all want to capture an element of his genius. Eventually, it is revealed that the production of Hannaford's movie (also titled The Other Side of the Wind) is falling apart and his own neuroses and insecurities are being exposed, leading Hannaford to question his ability to finish the movie as well as his own identity.

Due to various financial and rights issues, the footage languished on various shelves before it was rescued by a team that included director Peter Bogdanovich (a film critic turned writer-director, and character actor) veteran producer Frank Marshall of Amblin Entertainment fame (TOSOW was his first gig and marked the start of his interest in film-making), producer Filip Jan Rymsza, and Netflix who (with the help of an Indiegogo campaign) bought out the rights to the footage and were able to complete it after a legendarily protracted legal hassle.

The movie premiered at the Venice Film Festival on August 31, 2018 before getting a general release on Netflix as well as a limited theatrical run on November 2. The trailer can be seen here

The Other Side of the Tropes: