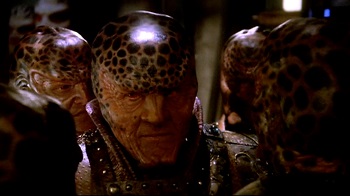 G'Kar has to put some Narn upstarts in their place.

In orbit over a planet, a Narn heavy cruiser is fighting off several Centauri warships. They are about to leave when they receive a signal from a transport carrying women and children. They hold their jump point open long enough for the transport to get through, but the cruiser is destroyed before they can escape.

G'Kar ends the recording of the battle and turns to Sheridan and Ivanova. He explains that the Centauri attacked without warning, killing 500 Narn civilians despite promises not to attack civilian targets, though Londo had sent a statement alleging that the Narns were deliberately hiding military assents behind civilians. Sheridan promises to try to get Earth to intervene on the Narns' behalf. He then gets a message that a ship has arrived.

The new ship belongs to the Lumati, an apparently advanced race that Earth Central wants on their side in case the war spreads. Since he has his hands full with the Narn and Centauri situation, Sheridan tasks Ivanova with bringing them in, telling her to do whatever it takes.

G'Kar has gone to show the recording to Delenn in an attempt to get the Minbari's support. He notes that the Centauri are still committing their forces, some of them are still unsure about it, and if the Minbari, second in power only to the Vorlons, step in they would be sure to fall back. Delenn is unhappy with the attacks on civilians but also notes that G'Kar, and the Narns, have said and done things in the past that makes it difficult to support them now. She cannot promise military aid, but she does promise to look for other ways to help. G'Kar leaves in disappointment.

In a bar, a loud group of Centauri start antagonizing a group of Narns.

Ivanova meets the Lumati dignitary, Correlilmurzon, and his aide, Taq. Taq speaks first, but quickly explains that Correlilmurzon speaks through him until he can determine that humanity is not "inferior" and worthy of being spoken to. Slightly put off, Ivanova leads them off on a tour of the station.

Londo is also meeting with people, much to his annoyance. People who mere months ago ignored him at best are now hanging off his arms, looking for favors. "I've become a wishing well with legs." He laments. His new found respect is not what he thought it was.

In a corridor, officer Zack Allen breaks up a fight between a Narn and Centauri. He pushes the Centauri away and draws his gun on the Narn, who, egged on by the Centauri, charges. Zack shoots him at point-blank range, killing him. Later, in Sheridan's office, he and G'Kar are arguing about it. Sheridan wants to help, but incidents like this are making it difficult, and he warns that if they continue, he'll have all Narns thrown off the station.

Londo finds Garibaldi in the bar and tries to persuade him to have a drink with him. He wonders aloud why everyone seems to be afraid of him now. Garibaldi isn't sure he knows him anymore, but says he'll try to stop by later for a drink.

G'Kar meets with a group of Narns, telling them to stop the fights. They need allies and for that they need to keep the peace on the station. After he leaves the Narns bring out the Centauri who started the fight earlier and kill him. They intend to launch a major attack and kill every Centauri on the station.

After the body has been brought to Medlab, Franklin examines it, but can't find any direct proof that Narns were responsible. Sheridan wants to delay telling Londo about it until they have a better grasp of the situation. Londo, in the meantime, is still waiting in the bar for Garibaldi, who still hasn't shown up. He leaves as the bar closes for the night.

The next morning, the Lumati come to Ivanova's quarters. Correlilmurzon, has gotten the idea that she's only showing them the most appealing parts of the station in an effort to impress them. She suggests they choose any part of the station and she'll take them there.

Meanwhile Na'toth observes the Narns buying weapons for their attack.

Sheridan receives a message from Earth Central denying his request to intervene. He's not happy about it, but decides to try another route and calls Delenn.

G'Kar is in his quarters when Na'Toth bursts in with news that the Narns are going against his orders, and preparing for an attack. He decides he needs to handle this himself.

The place the Lumati chose is Downbelow. Ivanova is confused, but Correlilmurzon observes conditions here with interest. Since it seems humanity has separated superior from the inferior in their own race, they are worthy of his attention and he begins speaking to her himself.

The Narns are planning their attack when G'Kar arrives. He declares that his authority comes from the Narn government and can only be taken by force. He and the lead Narn start fighting, and while he is cut with a poisoned blade, eventually defeats the upstart. He then orders all of them back to their quarters.

Sheridan meets with Delenn to arrange some kind of unofficial aid to the Narns, mostly food and medical supplies, as well as taking whoever they can out of the combat zone. Delenn agrees and pledges whatever help she can.

In Sheridan's office, Ivanova is concluding the deal with Correlilmurzon. He wishes to end it in the traditional Lumati fashion, which she agrees to. He is delighted, and tells her it is having sex. Ivanova is stunned and fakes a call from C&C to make a (somewhat) graceful exit.

Na'Toth delivers the ringleader to Garibaldi, and has him admit to murdering the Centauri and plotting the attack. Garibaldi and Sheridan talk about what will happen when this goes to trial, things are going to get real ugly.

Ivanova walks with Franklin complaining about her current situation. He tries to think of solutions, and offers to fake sickness or something since it's doubtful Correlilmurzon knows much about human physiology. Ivanova suddenly gets an idea and runs off.

Na'Toth brings word that Sheridan wants to see G'Kar in his office, and G'Kar, certain they are about to get the aid they need, hurries off, when he gets there he is dismayed to learn that they will only be sending leftover supplies and smuggling a few out when they can. And if he talks about it, it will stop. He thanks them for their efforts, but soon after leaving Sheridan's office breaks down...not seeming to know whether to laugh or to cry.

"Old way, you roll over and go to bed. New way, you go out for pizza and I never see you again." She explains.

He stares at her for a second, then gets up and leaves. Taq comes over, kisses her hand and then follows Correlilmurzon, chuckling under his breath.

Later Sheridan meets Ivanova and congratulates her on her handling of the negotiations. Correlilmurzon even sent her a gift. She opens a card which simply reads, "Next time, my way." Sheridan looks confused and asks, "Commander, is there something you want to tell me?"

Londo is in the bar again when Garibaldi shows up. He asks why Londo did what he did, and Londo explains that the Narns are falling, and they will soon have plenty of trouble. If he can spare Garibaldi some trouble, it's a nice coincidence.

"It is good to have friends, is it not, Mr. Garibaldi? Even if only for a little while?"

"Even if only for a little while." Garibaldi agrees.