Manga / Liar Game: Roots of A 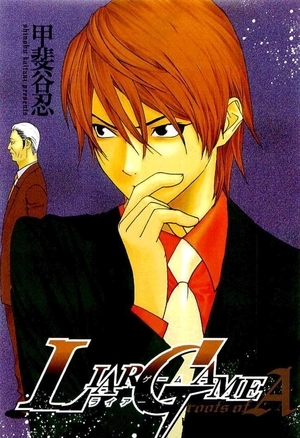 The prequel for the Liar Game, written and illustrated by the same Kaitani Shinobu. Actually, only two chapters (the opening one and the new one-shot Liar Game: Roots Of A #2) deal with Akiyama's backstory; the others are a two-shot that deals with a fortuneteller and the rest are simple one-shot chapters. The non-Akiyama stories are not part of the main Liar Game story.

Akiyama's chapter revolve around him and a few other classmates (all of them top of the class) at Teito University trying to complete an assignment for Professor Yukiya Okabe's criminal psychology class. They need to create a detective profile for a person based on their letter that Professor Okabe found. With such limited information, this profile needs to be complete, accurate, and correct, unless the students want to be forced spending their summer attending his lectures...

The other stories deal with the fortuneteller Asuka Kiryu, while the rest involve Cool Loser Minoru Shibura whose only redeeming talent is skill with darts and his struggle with the staff at Green Mountain Starlight Park, a Dating Service Disaster episode, and even a chapter for the author's dog.

Liar Game: Roots of A provides examples of the following tropes: