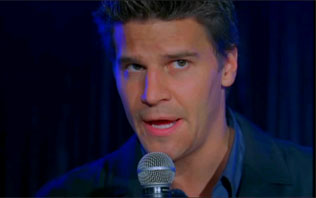 Written by David Greenwalt, Joss Whedon, & Mere Smith (uncredited)This season opens with the individual members of Angel Investigations being called into action. Angel rendezvous with Wesley and Cordelia at an athletic gym, where they walk in despite the manager's protests to stop some demons trying to commit a human sacrifice. Quip of the week? "Steroids. Not good for you."

With their old office now a pile of driftwood, the gang is operating out of Cordelia's apartment - Hence the spiffy whiteboard listing all the cases they’re working on. Cordy and Wes are debating whether they've already killed the demon that was raised by Wolfram & Hart, while Angel is contemplating joining a gym. He may need to; he'll be human one day! Cordelia pauses, and Angel and Wesley lunge to catch her, greedily anticipating a vision. ACHOO! So much for that. She sneezes again, and is hit by a vision for real: a large, furry demon and a pregnant women.

At Wolfram & Hart, Lilah enters Lindsey's darkened office to find him fumbling with a CD case, no thanks to his prosthetic hand. He's not handicapped, he's handi-capable! Much snickering at Lindsey's expense. Lindsey tells Lilah that his visitor is a fan of Chopin. Their guest is revealed to be Darla, who has cleaned up nicely. Darla senses that Angel is nearby, and Lindsey expresses how anxious he is to make Angel for what he's done to them.

Wesley says he’s been "broadening the contact base", and knows an informant named Merl who hangs out at a popular demon hot spot, Caritas. Cut to a demon singing "I'm So Excited" by the Pointer Sisters to an audience of both demons and humans. Kumbaya, indeed. Cordy questions why a stool pigeon would ever feel safe in a Karaoke bar, and Wesley explains that it is a violence-free zone. Wesley sits next to Merl, a greenish demon who gets all nervous because he knows Angel's rep. Wes lays out an envelope with money and asks about the location of the Prio Motus demon from Cordelia's vision. Merl asks for more money, explaining that "Prios" are dangerous stone cold killers. Wesley obliges, and Merl tells them the Prio is probably traveling in the L.A. sub-tunnels.

On the way out, the green MC asks Angel to sing, but he flatly refuses. Angel is put off by him. Wesley explains to Cordelia that the host is anagogic — when you sing, you bare your soul, and The Host can then read it. The Host gives it one last try and gives Angel a warning: There's always that feeling of smooth sailing right before a fall. "There's three things I don't do:", Angel proclaims, "tan, date, and sing in public."

Angel rushes to the scene and sees a pregnant woman walking about. She is startled by Angel, who is equally-startled by the Prio demon appearing. A fight ensues and Angel breaks the demon’s neck. Angel gallantly reassures the woman that's it's dead - and is stunned when she starts to cry and kneels by the dead Prio's body, saying "he" was her protector. Angel realizes his mistake. She mentions a tribunal, but when Angel tries to help her, the woman storms off.

Back at the apartment, Angel gives Cordy and Wes the 411 on what happened. The demon had a change of heart and became a soldier, like Angel. Angel is determined to find the woman and help her, and declares the Prio's mission is now his. He asks Cordy and Wesley to find out more information. Angel heads out to find Merl, whom he suspects was being less than straightforward.

In a dark street, Angel manhandles Merl against a metal fence. Merl sings like a canary. There’s a price on the woman's head and the baby she carries, he explains. The baby girl is supposed to be very special, and the dark ones want her dead. Merl tells Angel the Prio lived somewhere in Boyle Heights, underground. Because Gunn knows the tunnels better than anyone, Angel asks him where the Prio might have lived. Gunn offers to play tour guide.

While walking through tunnels, they spot a large, airless vent. The vent opens into a living place. They have a look around and Angel finds a strange metal disc hidden in a secret compartment of a wooden box. Angel gives the coat of arms to Gunn and tells him to deliver it to Cordy and Wes. He hears a noise and pulls out a samurai sword... on the pregnant woman. Batting 1000 there, Angel! She tells him she was once a stock clerk at a Costco and shows her frustration at her daughter's predicted future as a seer — a situation that she doesn't really understand. She explains that she needs to find the coat of arms and present it to an other-worldly court known as The Tribunal — maybe she'll have a chance and The Tribunal will protect her unborn baby. A cloud casts over Angel's face as he listens to the woman's description of the talisman: a metal disc. Drat, foiled again! Having lost her temper with Angel, the woman tries to leave but is waylaid by a mob of bounty hunters. Angel tells her to go to the address on his business card. She runs out and Angel stays to fight off the demons.

When Angel returns to Cordelia’s, he expects the pregnant woman to be there already, and becomes distraught that she's not there. Angel has a crisis and admits that he thought he'd had it made already. The promise of becoming human was within his reach, and he let it go to his head. Wes comes in with the background information. It's a medieval coat of arms needed to be presented before the ancient court that settles grievances with a fight to the death. Wesley points out that these events are mystical, and the location is not exact. Have gavel, will travel.

And at Caritas, presenting: Angel, the Vampire With Soul! Angel looks as pained as those watching him belt out an off-key version of "Mandy". The Host pulls him aside and starts to read him: Angel made an honest mistake, he says, but things don't look too good for the mother. After torturing Angel about his choice of song some more, The Host spills the location: 4th and Spring.

The expectant mother is walking down the middle of 4th and Spring when the tribunal rises from the ground. A fully armored knight rides up before the tribunal and throws the coat of arms on the ground as a challenge. The woman asks for asylum and is refused by the tribunal; she doesn't have the coat of arms and no champion, so she's out of luck. Just then, the other metal badge is thrown on the ground. Angel declares himself her champion. He mounts the horse and arms himself with a shield and a lance. Both champions joust with each other until Angel is thrown off his horse. Angel uses his sword to pull the knight onto the ground, where they duel. A sword plunges into Angel and he falls on his knees. The tribunal declares Angel defeated and declares that the woman now belongs to the knight. The knight is about to kill her when Angel removes the sword and cuts off the knight's head. The Tribunal overlook this poor bit of sportsmanship and declare that both she and her daughter are now under their protection.

At Cordy's apartment, the whiteboard is being mothballed by Angel. Wes realizes that it's about doing the job, not keeping score. Angel says he has somewhere to go: the women's penitentiary. In the visitor's room, Angel picks up the phone and on the other side of the glass, Faith picks up hers. Both Angel and Faith consider their rocky road to redemption, and whether or not they'll ever make up for their previous indiscretions.