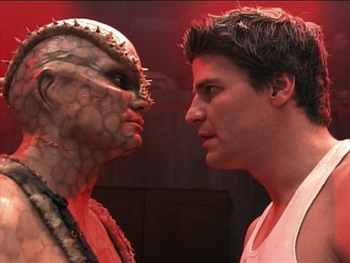 “Tonight’s match features a new favorite in the ring—a vampire. Ladies and Gentlemen, please welcome for the second night in a row, and still fresh from his first kill—Angel!”

As Cordelia and Wesley bicker while using a new demon database, Darin MacNamara stumbles into the Angel Investigations office, saying his brother Jack was kidnapped the previous night by a group that was not "exactly people". Darin tells Angel he and his brother were not close, since Jack wasn't as successful as Darin. Jack had a gambling problem and, though Darin had paid off bookies for him in the past, had recently refused to help him again. He felt guilty afterward and went to Jack's place in time to see the non-people taking him away. Angel goes to find Ernie, the bookie Darin wouldn't pay off, and interrupts his poker game to try to get information. He promises that Darin will pay off Jack's debts, but Ernie says it's no longer about money, but about making an example out of Jack. Angel offers him some money and learns that Jack may be somewhere under Beechwood Canyon. Cordelia and Wesley search the demon database with the information Darin gave them about the demon who took Jack. Wesley argues that by the time Cordelia finds the demon on the computer he could find it in his book, but Cordelia proves him wrong, identifying the Howler demon.

Angel climbs down into a sewer under Beechwood Canyon where he is attacked by Howler demons. He knocks out two of them, then threatens the remaining one. He learns the Howler demons sold Jack, then asks to whom.

Angel drives to a run-down neighborhood where he sees expensively-dressed people lining up to enter a door where there is no business sign. He pulls the bars away from a basement window and enters the building. He finds a lounge with a bar. A woman sitting alone, whom we later learn is Lilah Morgan, accidentally drops a ticket from her table. Angel retrieves it, studying it before he returns it.

Angel finds another room where two demons are fighting gladiator style. One of the demons is knocked down and the crowd chants, "Killing blow!" A man nearby tosses a knife to the standing demon, who slits the loser's throat. The crowd cheers and the demon, Tom Cribb, is pronounced the winner. The next demon up, Val Trepkos, is announced as Angel spots Jack being led through the crowd.

He follows them down a corridor, where they meet up with Darin, who warns Jack to be wary of Angel, since he defeated the Howler demons. Angel realizes that he was set up and tries to fight off the men, but they render him unconscious with cattle prods. Jack says that Angel "has some attitude" and will be "a crowd-pleaser." Angel awakens later to find himself in a cage, surrounded by other demons in cages. He has a silver bracelet on his wrist that reads "XXI", which he learns keeps him imprisoned. He tries to converse with his fellow captives but they don't appear to speak English. Jack tells the slaves that the only rule is that they stay inside the red area marked off around the cages. They can only get out of the red area when their bracelets are removed, and that only happens after their 21st kill. Angel refuses to kill anyone and Jack replies that in that case, he'll be the one killed.

The next day, at Angel Investigations, Wesley calls Kate and is disappointed to learn that she doesn't know where Angel is. Cordelia is also worried that they can't reach Darin. Wesley leaves to find Ernie, since the bookie's establishment was the last place Angel went.

In the slave quarters, it is mealtime. Angel objects when Tom Cribb steals food from Mellish, another slave. Tom Cribb threatens Angel, but backs off when guards appear with weapons. Mellish tells Angel that he can fight his own battles, and warns Angel not to "rock the boat." Jack and Darin appear to announce the fight schedule for that evening. Lasovic, one of the demons scheduled to fight. makes a break for it, but disintegrates when he crosses the red line, leaving only his bracelet behind. Jack chooses Angel to replace him for the evening's fight.

Wesley interrupts Ernie in the act of administering a beating. Wesley asks where Angel is. Ernie asks for money in exchange for this information, but Wesley refuses to pay, produces a miniature crossbow, and threatens to beat it out of him. Ernie draws a gun but Wesley knocks it out of his hand with the crossbow bolt and draws a handgun of his own. He repeats the question.

While the fights are starting up that night, the woman whose ticket Angel looked at the night before, Lilah Morgan, talks to Darin about Angel. She mentions that he has a soul and wonders if this will give him an advantage in the ring. Mellish offers Angel information on his opponent. Angel says he will not kill anyone. Mellish asks Angel if he on drugs and explains, "it's not like you have a choice." Angel and his opponent enter the ring, and Cribb, the demon who fought the previous night, notes that Angel isn't even fighting.

Cordelia and Wesley arrive at the arena, dressed up in fancy clothes. They realize too late that they've forgotten their fake police badge, but Cordelia approaches a couple anyway, introducing herself as Detective Andrews and Wesley as Detective Yelsew. Wesley flashes his wallet instead of a badge and Cordelia tells him to take down the couple's license plate number. She checks the couple's tickets and tells them that they're for an unlicensed event. Wesley warns that a raid is going to happen there tonight, so the couple decides to leave, leaving Cordelia and Wesley their tickets.

Inside, Baker beats on Angel, who still won't fight back. Cordelia and Wesley enter, spotting Darin, who's holding a bracelet. Wesley notes that these demon matches have been revived from the Roman Empire and that the bracelets kill people if they're wearing them when they cross the red line. Darin puts the bracelet down and gestures for a guard to drop a knife into the pit. Baker picks the knife up, cutting Angel's arm with it. Angel morphs into vamp face and the crowd chants, "Killing blow!" Angel defends himself from a few more hits, then stabs Baker in the chest with the knife. Once Baker is dead, the announcer says that Angel has made his first career kill.

Angel returns to the waiting room as Jack calls Trepkos and Mellish for the next fight. As Trepkos is leaving, Angel says to him, "If no one fights, no one dies." He tells Trepkos there is "another way out" if the captive demons work together. As Jack gloats, Trepkos instead promises to kill Mellish quickly, which he does.

Outside the building, Cordelia suggests calling the police. Wesley thinks the police are probably involved, and even if they aren't, that Darin would "destroy the evidence," that is, kill the fighters, the moment they showed. Cordelia then says she and Wesley need to get Angel out of captivity. Wesley says he might be able to make a magical key to release the cuffs, if he could get one of them to test on. Cordelia produces a cuff she swiped, the one Jack had earlier, when he wasn't looking.

When Jack congratulates Angel on his victory, calling him "a demon like the others," Angel grabs Jack and pulls him across the red line. He puts Jack in a head lock and demands a key to open the cuffs. When Jack refuses, Angel asks the other demon fighters to check Jack's pockets, but they do not move. Darin and the guards appear. Angel insists that he will not let Jack go unless he and all the other demon fighters are released. Darin shoots Jack, saying "now he's my dead brother." The guards cross the red line and knock out Angel with cattle prods.

He wakes up in an office where he sees the woman he and Darin both talked to earlier. She introduces herself as Lilah Morgan, a lawyer working for Wolfram & Hart, and explains that she persuaded Darin to sell his contract to the partners. She tells him that he's free to go. Angel guesses that part of the deal is for him to leave W&H and McNamara's gladiator business alone. Lilah does not deny it. She points out that many people in Los Angeles need his help, but Angel refuses to compromise.

At Angel Investigations, Wesley attempts to open the bracelet Cordelia stole. The work goes slowly. One difficulty is finding a substance that will conduct the right amount of electricity.

McNamara's guards return Angel to the arena, where the other demons call him crazy for returning. Darin snaps Angel's bracelet back on and tells him that he's fighting Trepkos next; if Trepkos wins, Angel will be his 21st kill.

Back at AI, Wesley says he needs something "supple enough to thread the locking mechanism, but strong enough to spring the release." Cordelia removes her horsehair bracelet ("from Keanu, my palomino, before the IRS took him away") which does the trick.

At the arena, Lilah bets $10,000 on Trepkos. As Angel and Trepkos enter the ring, Angel tells Trepkos that he will always be a slave even if the cuff comes off. Trepkos promises to kill Angel quickly and Angel replies that he won't let him. The fight begins and, again, Angel defends himself.

Cordelia distracts a guard so that Wesley can get to the slaves' quarters. He asks Cribb where Angel is and is told that he'll be dead soon. Wesley announces that he has a key to open all of the demon's bracelets and Cribb grabs it from him. A guard drops wooden staffs into the pit and Trepkos charges Angel with one of them. Wesley returns to Cordelia and tells her that someone took his key.

In the pit, Trepkos' staff breaks. Angel knocks Trepkos off his feet, retrieves part of the broken staff, and holds it to Trepkos' throat. Cribb unlocks his bracelet, then approaches the arena. Angel lets Trepkos go. Trepkos gets up and attacks Angel from the rear, gaining the upper hand. The crowd shouts for Trepkos to kill Angel, but Trepkos decides not to. Darin sends guards after both of them. Wesley pulls out a gun and tells Darin to stop the guards. Cribb and the other demons storm the arena, which distracts Wesley long enough for Darin to grab his arm. While the demon fighters and the guards face off, Cribb unlocks Angel's bracelet, ironically calling him a loser. The spectators all leave the arena. Darin is about to shoot Wesley when Cordelia pushes him into the pit. Darin points the gun at Trepkos and tries to blast him for not killing Angel when it would have set him free, but is stopped by Angel who disarms him. Cribb puts a bracelet on Darin's wrist. Darin is thrown out of the red circle and disintegrates. Cribb unlocks Trepkos' bracelet and Angel and Trepkos congratulate each other on a good fight. "I could have taken you," Angel claims. Cordelia and Wesley help Angel out of the building and he thanks them for finding him before it was too late. Cordelia says that Wesley was the one who figured out how to make the key, and Wesley says that she was the one who figured out that horsehair would work. Angel says that they did good work, even though, as Cordelia points out, they released a bunch of demons.