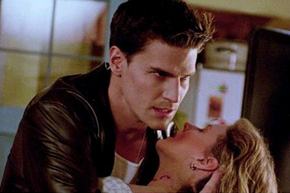 A trio of vampire assassins ambush Buffy on her way home from a Pre-Fumigation Party at the Bronze. Angel shows up at a critical moment, but is wounded. Buffy abandons the fight and helps Angel run to her house, where Angel exposits that a vampire can't enter someone's home unless it's invited in. Remember that, kids.

Buffy bandages Angel's wound, and they flirt a bit. Joyce suddenly drops in, and Buffy quickly improvises that the visibly-older Angel is her "tutor". Joyce sternly suggests that it's a bit late for "tutoring". Buffy pretends to pack Angel off, but instead sneaks him up to her bedroom to wait out the vamps. There's some awkwardness about sleeping arrangements before they settle in for the evening.

The next day, Angel camps out until nightfall while Buffy heads to school. Returning home, Buffy brings some supper for Angel, who mutters miserably that he's older than she is and that he should go. They take that last half-step toward each other and start kissing. Suddenly, Angel pulls back, and Buffy lets out a terrified scream...because Angel is a vampire. With Joyce alerted, Angel haphazardly escapes out the window and returns to his dank apartment. He's a little surprised to see Darla sashaying from the shadows. They talk, and we learn that the two used to be an item. As a parting shot, she challenges him to tell Buffy about "the curse," and if it blows up in his face, he always has a home with The Master — and her. Angel stands there looking Real Troubled.

In the library, Giles scans over the Watcher Diaries for any mention of Angel and pulls up Angelus, "the one with the angelic face", who wreaked havoc all over Ireland and Europe. He later migrated to America, where he shunned vampire life; after that, the record runs dry. Buffy argues that Angel has had ample opportunity to feed off people in Sunnydale but resisted. Xander, delighted by this news, reminds Buffy that it's her duty to slay Angel. Thanks.

Meanwhile in the Master's lair, Darla takes another stab at volunteering to kill Buffy. She cooks up a plan to have Angel kill Buffy, thereby returning to the Master's fold. Darla drops in on the Summers Home, where she cons Joyce into inviting her in by claiming to be Buffy's "study buddy". Prowling around Buffy's house, Angel hears Joyce's cry and rushes in just as Darla begins to bite. Daring Angel to drink too, Darla thrusts Joyce's limp body into his arms and flees out the back door. Tempted by Joyce's warm blood, Angel momentarily vamps out, but is discovered — in flagranté, so to speak — by a newly-arrived Buffy. Horrified, Buffy throws him out of the house (literally), then phones for an ambulance.

At the hospital, Buffy, Giles, Willow and Xander try to help "anemic" Joyce reconstruct events, and she says her last memory is of inviting Buffy's "friend" inside. Buffy misunderstands, thinking Joyce means Angel. Leaving her mother in the care of friends, she sets out to kill Angel. At Angel's apartment, Darla works him into a fury, telling him how easy it was to poison Buffy against him, exhorting him to kill or be killed.

Buffy tracks Angel to the deserted Bronze. After some impersonal and witty banter, Angel is ready to rumble. Eventually Buffy gets Angel in her crossbow sights; he morphs back to his human face and tells her to kill him. Buffy intentionally shoots wide and her bolt thunks into the wall beside his head. When Buffy demands to know why Angel toyed with her affections, Angel laments that he was cursed by the Romani, a gypsy tribe, for eating one of their daughters. The Gypsies restored his soul as a means to wrack him with guilt, eternally tormenting him. Suddenly, Darla jumps out from the shadows, packing two pistols. She hisses that she and Angel were lovers for two centuries and that she is Angel's sire. Having now written Angel off as a lost cause, Darla advances on the duo, guns blazing. Angel yanks the crossbow bolt out of the wall and stakes Darla through the heart, dusting his maker.

At the Bronze's Post-Fumigation Party, Buffy and Angel convince each other that their romance can never happen. With a final goodbye, they kiss. Angel's open shirt reveals his chest is branded by the impression of Buffy's cross.