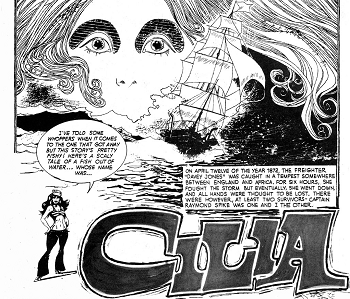 "Cilia" is a seven-page short comic story published in issue #16 of the Vampirella comic magazine, released in March of 1972. It is written by Nicola Cuti and Drawn by Felix Mas. It is notable as the source of the terms "cilophyte" and "cecaelia" to denote an octopus-based mermaid, although the latter term does not appear in the comic and may be a corrupted adaptation of the title character's name.
Advertisement:

The story contains three protagonists: the titular Cilia herself, her husband Raymond Spike who is the secondary narrator, and their friend Zackery who is primary narrator. The latter two were crew members of the "Davey Jones", a ship that sank on April 12, 1872. While Zackery went out from shock, Raymond, the captain, took care of him on a makeshift raft, but would've been unable to keep him alive if not for their chance meeting with Cilia, a cilophyte, who had gotten lost in the same storm that downed the "Davey Jones". She comes to take care of them while they're adrift, providing food and medicine until they reach the shores of Kenya. By this time, she and Raymond have fallen in love and she agrees to marry him and join him to England while Zackery recovers in Kenya. The new couple's happiness only gets to last for so long, as the local fishermen catch on to the fact Cilia isn't human and come together to end her. They strike mere hours before Zackery arrives to meet his mystery savior, but Zackery is the one to find an unconscious Raymond and watch over him until he awakens. Raymond fills Zackery in about all that he doesn't know yet and the two go to find Cilia. They are too late to save her, however.