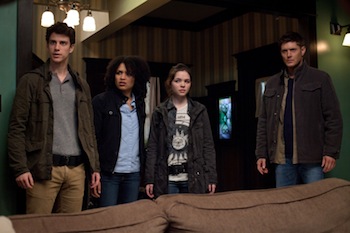 "I saw a way to make the future better, but to get there I had to do something hard." —Victor
Dean: They're hunters now. You don't just walk away from that. There's only one way out of that, and you and I both know it ain't pretty. Maybe they'll be different. Or maybe if we shut that hell hole once and for and all, those three can have a real life.
Advertisement:
Sam: Maybe they won't be the only ones.

Sam and Dean investigate the death of two women with their throats ripped out in Conway Springs, Kansas

. Posing as FBI agents, they find out that the local police have surveillance footage of three teenagers beheading a vampire. Dean recognizes one of the teenagers as Krissy Chambers, who left the hunting life after Dean helped her kill a Vetala in order to rescue her father and Sam. Sam and Dean track her down in a hotel, where she has tracked a vampire with her two friends, Josephine and Aidan. Krissy manages to drop the vampire with a dart filled with dead man's blood, and the vampire begs for help before Josephine beheads him. Krissy explains that her father was killed by a vampire and she is hunting the nest of vampires that killed her father and the families of Aidan and Josephine. They were taken in by Victor Rogers, a hunter Sam and Dean once worked with on a rugaru hunt. Victor is training them to be hunters, but still seems to be giving them a well-balanced life with a home and regular school. Sam seems drawn to the possibility of balancing hunting with a normal life, but Dean suspects something is not quite right.

Dean finds out that the vampire they killed was Jimmy Day, a veteran who returned from Afghanistan one month ago. Josephine's family was killed three months ago. Dean also discovered that the man in a hoodie who checked in to the hotel room where they found Jimmy was interested in a deserted lodge. When Deann goes to this lodge he finds a newly-made vampire who is in pain as she has not fed and has no idea what's happened to her. The teenage hunters arrive at the lodge, where Victor told them they would find the vampire that killed Krissy's father. Dean manages to convince them that the newly-made vampire may be innocent, and that they should try to help her instead of killing her. Back at Victor's house, Sam notices the blue van that they had previously seen Jimmy Day running towards before he was caught. Sam tells Victor, who knocks Sam out. When Sam wakes up he is tied to a chair, and Victor explains that he has been working with a vampire named Seth to make a better generation of hunters. After Victor scouted the teenagers, Seth killed their families so that they would be motivated to be hunters. Victor intends to have Seth kill Sam, and leave his body for the teenage hunters to find, further fueling their need for revenge.

Dean and the teenage hunters return and confront Victor and Seth. Seth manages to grab Aidan, but Josephine stabs Seth while Krissy shoots Seth with dead man's blood. Krissy then points her gun on Victor and dry-fires it as she names his crimes. Victor is overwhelmed by guilt and pulls a gun from his boot, shooting himself in the head. They use Seth's blood to cure the newly-made vampire from the lodge. Dean wants to take Krissy to her aunt in Cincinnati, so she can have a normal life. Krissy wants to stay with Aidan and Josephine, and she says they won't go looking for trouble, but if any monsters come around, they will be ready. Dean agrees to this and tells them Garth will come by to check on them. Dean also tells Sam they need to close the Hell Gates so the kids have a chance at a normal life. Sam hopes they won't be the only ones.

For this episode = 3 vampires and 1 human.