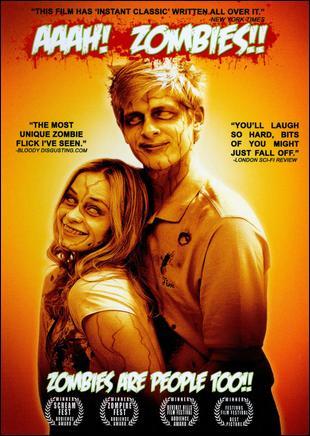 Zombie film unique in that it takes the point of view of the Zombies. A lone motorcyclist intercepts a military transport shipping toxic materials, causing a car wreck which results in a lone keg getting to a bowling alley and mistaken for beer. Mike uses the "beer" to make alcoholic soft-serve ice cream, and shares it with ex girlfriend Vanessa, fellow bowling alley employee Tim and his girlfriend Cindy. They all pass out, and wake up only to discover everyone else is speaking in a fast high pitch and has gone homicidally insane. Also, brains are ridiculously delicious, and drunk people are not hostile and can be understood.
Advertisement:

The film deals with the quartet trying to survive a world gone mad against them, and the army trying desperately to kill them all.