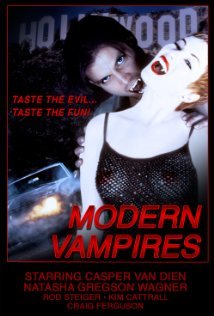 Modern Vampires is a 1999 Direct to Video Horror Black Comedy film. As the name implies is a modern (for the time) retake on the vampire mythos. The movie takes many characteristics of The '90s and uses them as part of the plot including obvious parallelism between vampirism and drug addiction / sexually transmitted deceases. The movie has some very crude humor clearly not for all audiences and some of the jokes are in Dark Humor territory.